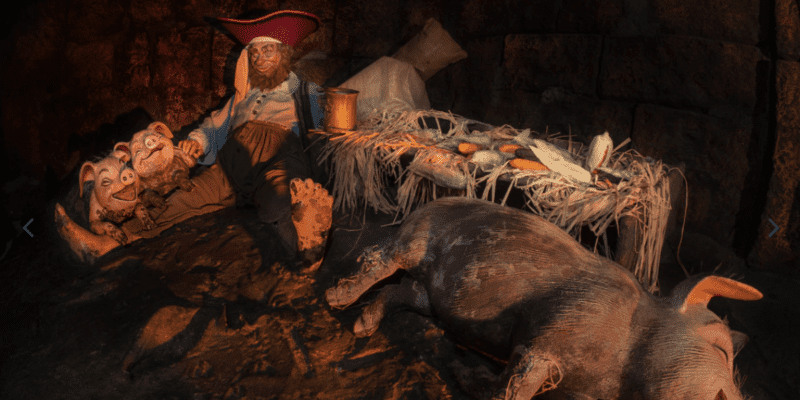 With the current refurbishment going on at Pirates of the Caribbean at Disneyland, Guests are eager to see what changes will come for this classic attraction.

Opened in 1967, Pirates of the Caribbean was the last attraction whose construction was envisioned and personally overseen by Walt Disney, as he would pass away only three months before it opened. It instantly became a fan favorite and an icon for Disneyland Resort. So much so that when Walt Disney World opened in 1971, Guests demanded a version of the ride to be built in Orlando’s Magic Kingdom.

Related: Disney Set to Make Mechanical Changes to Pirates of the Caribbean

However, some of the changes that have been made to the attraction have had to be more discreet.

TikTok user Mitch Mays (@mitchmay2) recently shared a video talking about one significant modification that had to be made in the ride. In it, he mentions the “animatronic appendages” most characters in the Pirates of the Caribbean attraction had below their belts, giving them a noticeable bulge that had to be removed.

Former Imagineer Kevin Lively (@livelyland) confirmed this fact but corrected some details. In the original video, Mays mentions the appendages were removed with scissors from the Walt Disney World version of the ride due to Guests’ complaints, while Lively comments the following:

That story actually took place before the attraction opened. It was before a costume review with Walt. To solve the issue, Alice Davis used a hacksaw.

This bizarre change is certainly not one Guests would imagine, but one the Imagineering team deemed necessary.

Related: Pirates of the Caribbean Evacuates Guests Onto Massive Ship After Ride Breaks

Days before its 55th anniversary, the original Pirates of the Caribbean at Disneyland Resort closed indefinitely for a deep refurbishment. The official Disneyland site describes the iconic ride as follows:

And on the note of the ride’s anniversary, Disney’s website adds the following:

At Disneyland, there is so much for Guests to enjoy! Now that the mask mandate has dropped for fully vaccinated Guests, Guests can enter buildings without a face covering if they so choose. Walking up to Sleeping Beauty Castle is always a dream, especially when you get to go inside and relive the story of Aurora and Maleficent. Riding classics like “it’s a small world”, Pirates of the Caribbean, Mr. Toad’s Wild Ride, The Haunted Mansion, Matterhorn Bobsleds, Splash Mountain, and more will have you feeling the magic, and craving a churro! Toontown is currently undergoing a massive change which will be revealed in 2023 with the reopening of the land, and the debut of Mickey and Minnie’s Runaway Railway. Plus, now at Disneyland, Guests can enjoy Star Wars: Galaxy’s Edge for some blue milk, or green milk, and ride Rise of the Resistance and Smuggler’s Run.

What changes would you like to see in Pirates of the Caribbean? Let us know in the comments below!