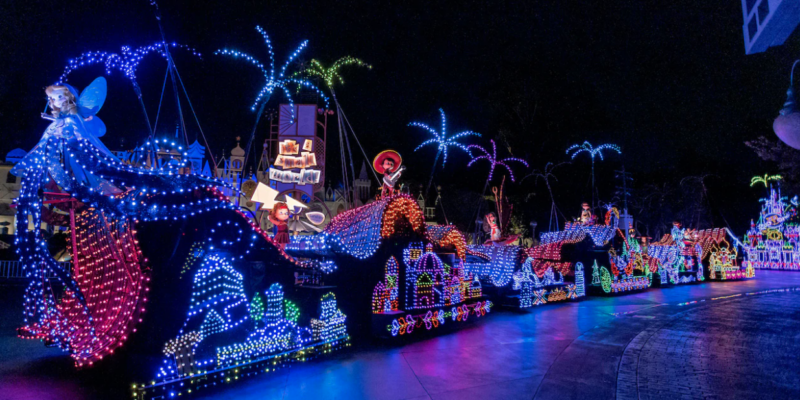 Many Guests were overjoyed with the return of a beloved classic to Disneyland Resort. After a surprise show of the Main Street Electrical Parade during a media event and live broadcast at Disneyland Park on April 20, the nighttime spectacular made its official debut last night, April 22.

Since the return of this fan-favorite parade, it was announced that some changes would be made. Disney Parks Blog stated the following when the announcement was made:

And while many Guests were excited to see new characters joining the parade and a celebration of inclusion and togetherness, as well as the celebration of the work of Disney Legend Mary Blair, some were outraged after seeing the new addition to this nighttime spectacular.

For example, u/samwosniaki quickly took to Reddit to voice their opinion on this matter. They asked what had happened to the “To Honor America” float in the Main Street Electrical Parade and called the new addition a monstrosity. It was not stated if this Redditor witnessed the parade in person or during the live stream Disney Parks made through its social media, but either way, they were not happy about what they saw.

For example, u/pquade commented that the “To Honor America” float had been added to the parade as America’s Bicentennial would be celebrated a few years after this parade’s first appearance in 1972. They said that the float didn’t make much sense in the later years. Although Disneyland is an American icon, devoting a lot of energy to celebrating something that isn’t Disney at the end of a parade might not be the most convenient. This makes a really good point, especially if we think of the recent efforts made by the Walt Disney Company to promote diversity and inclusion.

The “Honor America” unit made a lot more sense back in the years leading up to America’s Bicentennial; 1976.

However, if you really think about it, it hasn’t made a whole lot of sense in the years afterward. The name on the front of the Park says, “Disneyland.” Yes, the Park is an American icon, but if you think about it, it just doesn’t make a whole lot of sense to devote that much energy at the end of a Disneyland parade to something that isn’t Disney.

Redditor u/costco_ninja added to the conversation, saying that the changes had nothing to do with patriotism but came from the need to make the parade relevant for today’s audience and that by adding new characters, Disney is making an effort to keep the parade up to date while still honoring the original.

I disagree. It has nothing to do with patriotism. The parade itself isn’t relevant for today’s audience. The characters as they exist in the parade haven’t been seen in their original form in quite a while (I know there have been live action remakes, I’m talking about the original release). By adding an updated float with more modern characters, they’re keeping the parade up to date while still honoring the original. Otherwise we’d be better off with Paint the Night, which I’m fully for.

As with everything, change may not always please every audience, but that doesn’t mean things should remain the same forever. Walt Disney himself once said, “We keep moving forward, opening new doors, and doing new things, because we’re curious and curiosity keeps leading us down new paths.”

The Main Street Electrical Parade will bring a line of exclusive merchandise and a new dining package to Disneyland Resort, as well as a collectible Light-Up Turtle Sipper and a Light-Up Elliott Dragon Popcorn Bucket, which are currently being sold at several locations in Disneyland Park.

What do you think of the changes made to the Main Street Electrical Parade? Let us know in the comments below!