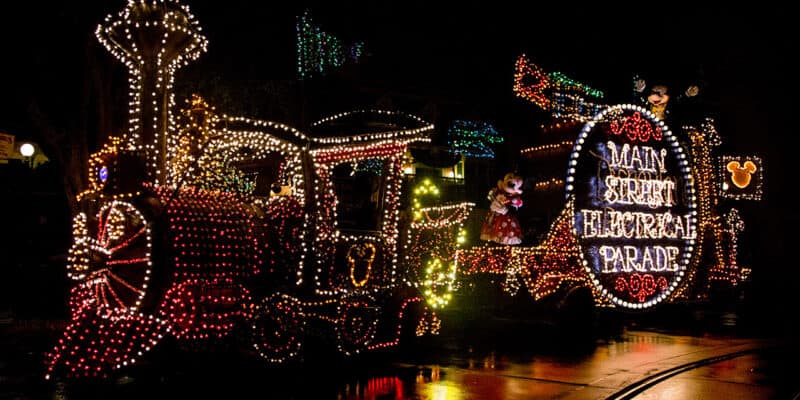 Coming soon on April 22, 2022, the “Main Street Electrical Parade” and “Disneyland Forever” fireworks spectacular will return to Disneyland Park. The much-anticipated return of these nighttime spectaculars marks another rung in the return-to-normal ladder, and we’re happy to see them! If the sights and sounds of these entertainment beacons aren’t quite enough, you might want to add taste! If so, a new Main Street Electrical Parade Dining Package is coming soon!

Settle into Main Street, U.S.A. to watch the classic nighttime spectacular light up the night. Along with new finale floats to entertain your modern fancy, Encanto characters, Pete’s Dragon and Mr. Snail will dance and chime the night away.

If you’re hungry as night falls, you can pre-book a Disney Dining and Entertainment package which includes a meal, beverage, dessert, and a reserved viewing spot for the Main Street Electrical Parade. The Plaza Inn will host your meal, and offers such selections as world-famous Plaza Inn fried chicken, house-made mac and cheese, Mickey-shaped sweet honey cornbread, and a decadent Disney Park berry cheesecake.

The Disney Parks Blog describes the Main Street Electrical Parade Dining Package as an event where Disney fans are listening to “Baroque Hoedown” while,

Experiencing the thousands of sparkling lights and musical sounds as the floats go by will be even sweeter after enjoying some  Reservations for the “Main Street Electrical Parade” dining package will open no earlier than April 14.

Disney also relays there is more excitement on the way, including a “nighttime spectacular foodie guide,” so stay tuned to Inside the Magic for the next few weeks as Disneyland prepares to once again, “ignite the night!”

Main Street Electrical Parade merchandise is also being released to celebrate the parade’s return, with items such as a Loungefly mini backpack, Minnie Mouse ears headband, and glow in the dark fantasy parade apparel.

Remember that Disney Dining Packages are subject to some restrictions or cancellations. A theme park reservation and valid admission are both required for entry into the Disneyland Resort theme parks for anyone ages 3 and older. The dining packages are nonrefundable, may not be exchanged or sold.

Will you be opting in for this dining experience on your Disney vacation? Leave us a comment below!