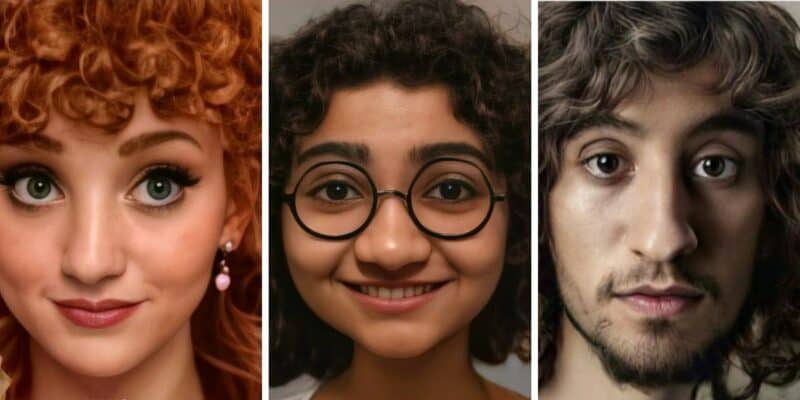 We’ve seen The Walt Disney Company create live-action versions of our favorite classic films. Alice in Wonderland (2010) was one of the first to debut, quickly followed by  Cinderella (2015), The Lion King (2019), and soon-to-air The Little Mermaid (2023). Casting directors attempt to draw likenesses to the cartoon characters, but often come up short with doppelgängers. An artist in Brazil has actually developed realistic portraits of cartoon characters, including those from the new hit, Encanto (2021).

Hidreley Diao, a regular contributor for the online publication Bored Panda, is an artist that loves the internet, social media, and artificial intelligence. Diao has been working with portraits, combined with AI technology and software, for years. He’s created the likes of fictitious sitcom offspring (Jeannie and Tony, Rose and Jack Dawson) as well as recreated historical figures, and the results are amazing. Diao writes on Bored Panda about his work, saying, “When we watch some animation, it is natural to accept the cartoonish proportions of the characters without any problems, after all, we are quite used to this type of trait. But what if, as in a spell, they became real, flesh and blood? I tried to bring them into our world through artificial intelligence. Check out and see how I did!”

Recently, he’s looked at pop culture and created seven portraits of the Madrigal family, from Disney’s massive hit, Encanto. Diao brings to life (real life!) Mirabel is the only Madrigal family member without a “gift.” From her classic curls to a modern pair of glasses, we can totally see Mirabel walking on the streets next to us! Next up is Pepa, Mirabel’s aunt, whose moods control the weather. Pepa Madrigal’s large eyes and bow-lipped mouth are a perfect, yet more realistic recreation of her look.

Next in the Madrigal family tree is Julieta. She can heal you with a meal, and Diao’s rendering of her face is full of care and affection. Julieta’s hair is perfectly matched to her character, and her eyes speak with personality, even though they are large.

We might not talk about Bruno (for the most part) but here, he deserves to be the center of the conversation. Bruno’s look, while youthful, hugely resembles his computer-animated figure. From his tousled curls to his sparse goatee, Bruno Madrigal is nearly perfect. Diao and his artful AI create large eyes, a widening nose, and thick eyebrows that would easily be recognized as this previously-outcast family member.

Our personal favorite, Lusa Magridal, the strong sister (both physically and in character), is another artful marvel. Julieta’s daughter only gets a portrait from the neck up, but remarkably shows her character in her face without seeming cartoonish or falsified. Moving past that “uncanny valley” of impersonation, we’d love to chat up Luisa about her song, Surface Pressure.

Who Disney really wanted to be popular was Isabela Madrigal, the flowery, graceful Madrigal grandkid. Creating dolls, clothes, dress-up sets, and more, Isabela was present, yet outsold by her heroine sister Luisa. Nevertheless, Isabela shows us to see “what else” we can do in our lives. Diao’s Isabela has long flowing hair and a graceful look, much like her animated counterpart.

Lastly, Diao created Camillo, one of the younger Madrigals, with the ability to shape-shift into other beings. Sometimes helpful and sometimes mischievous, Camillo won the hearts of many with his chameleon-like traits. Diao’s version hugely resembles the animated figure, with a wide nose and youthful eyes, paired with a curly mop and smile.

Disney fans and followers of Diao are asking him to now create the likenesses of Antonio, Abuela Alma Madrigal, and Dolores Madrigal to start rounding out the rest of the Disney animation familia.

Which of the Encanto characters are you most enchanted with. Do you like Diao’s real-life take on them? Leave us a comment below!