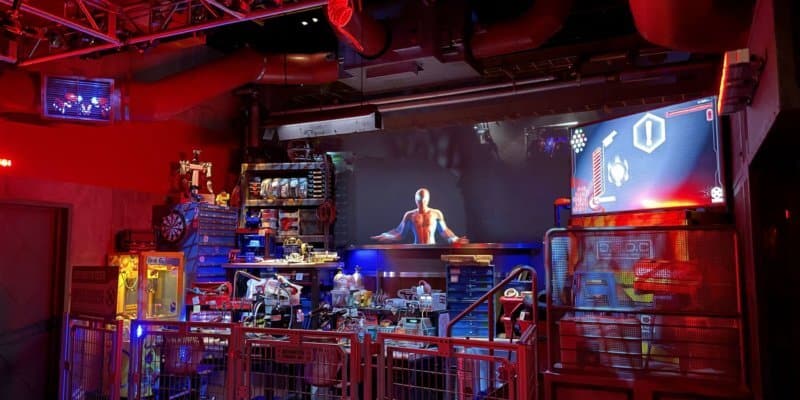 If you want to ride WEB SLINGERS: A Spider-Man Adventure on your next Disneyland vacation, you better hope that the doors malfunction!

It is interesting to hope that something goes wrong with a Disney attraction, as typically, that would ruin the experience. When something goes wrong while on an attraction, evacuations may occur from time to time which typically results in wasted time for the Guest. But, there is a specific malfunction on WEB SLINGERS: A Spider-Man Adventure that Guests will get a kick out of, and it won’t waste their time.

When Guests enter Disney California Adventure and head to Avengers Campus to ride WEB SLINGERS: A Spider-Man Adventure, they will soon see their ride vehicle, which will close around them like a pod. That being said, sometimes, the attraction’s doors will not shut correctly.

When this happens, the Cast Members quickly adjust the door closure issue, of course, but for the Guests, all they will see is a Cast Member using a plastic baseball bat to get the door into place to keep the immersion and theming of the attraction alive!

Hastin (@hastin) noted that this aspect was one of their favorite aspects about the attraction:

My current favorite operational detail at #Disneyland is that if the doors don’t close correctly on WEB SLINGERS, they use a plastic kid’s baseball bat to get them into the correct position. I love how in theme this is.

My current favorite operational detail at #Disneyland is that if the doors don't close correctly on WEB SLINGERS, they use a plastic kid's baseball bat to get them into the correct position. I love how in theme this is. pic.twitter.com/n7HGkxf97e

Guests who visit the attraction will be able to hop aboard a WEB Slinger vehicle and save Avengers Campus from being overtaken by out-of-control Spider-Bots.

As we have discussed in the past, WEB SLINGERS follows the following storyline:

“Your adventure begins at Avengers Headquarters in the WEB — Worldwide Engineering Brigade — facility, where Peter Parker (played by actor Tom Holland) is going to show you some of the exciting new technology being designed by young geniuses from around the world — including his new robotic sidekick, the Spider-Bot. Unfortunately, things go a little haywire during the presentation.”

Below is the official description of the attraction:

At the moment, the virtual queue is not active, and Guests can wait for the attraction in a standby line.

What do you think about this fun detail on the attraction? Let us know in the comments below!