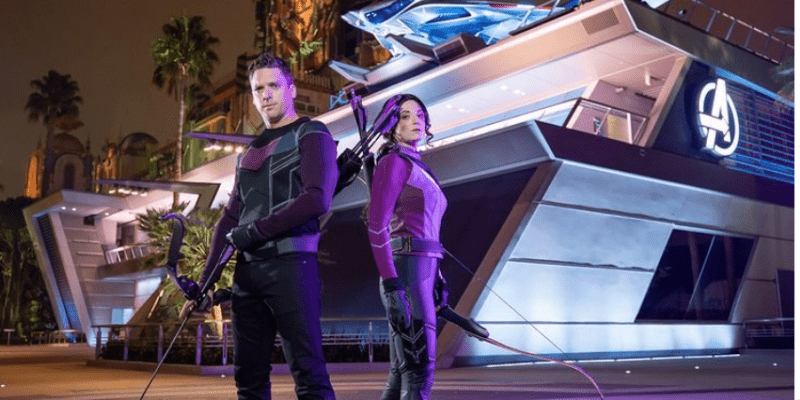 As the Marvel Cinematic Universe expands in 2021 and beyond, more superheroes are heading to the Disney Parks — specifically Avengers Campus at Disney California Adventure.

Disney Guests are treated to Spider-Man flying through the air, Loki showing off his ‘Variant’ transformation, and Black Widow and Sam Wilson’s Captain America appearing outside the Quinjet.

When celebrating the grand opening of Avengers Campus back in June, Marvel Studios head Kevin Feige confirmed that, like Disneyland, the Campus will never be complete — it will continue to grow and change as the Marvel Cinematic Universe does.

We’ve already seen Sam Wilson’s Captain America and zombie Captain America from Marvel’s animated What If…? series appear in the theme park, as well as Shang-Chi teased to be coming to California Adventure when actor Simu Liu made an appearance in an Avengers Campus promo video.

Straight from the @DisneyPlus original series #Hawkeye, Clint Barton and Kate Bishop arrive at Avengers Campus in Disney California Adventure Park just in time for the holidays… and to defend Avengers Headquarters from an attack by the notorious Tracksuit Mafia. Taking place on select days, this action-packed confrontation heads up to the rooftop and across the building. You’ll want to be there to see what happens this holiday season when the heroes from Hawkeye put a bow on it! Stream Hawkeye now! #Disneyland

Not only do Marvel fans get to see Hawkeye and Kate Bishop make their debut in the Parks, but also see a live stunt show on the buildings of Avengers Campus!

Just in time for the holiday season, the television series gets into the Christmas spirit as the archers must confront enemies like Ronin from Clint Barton’s past in order to get back to his family in time for Christmas.

Are you excited to see Hawkeye and Kate Bishop flex their bows in the Parks? Let us know!

Comments Off on New Hawkeye Stunt Show Coming to Disneyland