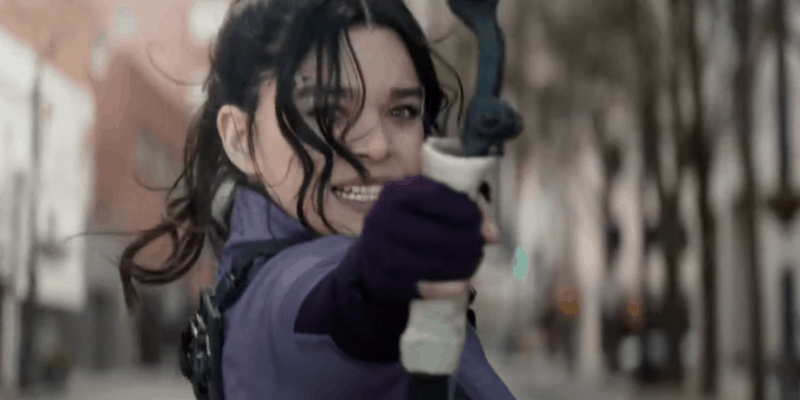 Who is Kate Bishop in the MCU? Ever since Marvel’s Hawkeye trailer dropped, the first look at the upcoming Disney+ series has peaked interest in the sharpshooting Avenger, Clint Barton and his protégé, Kate Bishop. According to a recent study, Hawkeye is the most anticipated project in the Marvel Cinematic Universe — ahead of Phase 4’s most hyped films like Spider-Man: No Way Home (2021) and Doctor Strange in the Multiverse of Madness (2022). The Hawkeye trailer even holds the distinction of being the “most liked” trailer for an MCU series on YouTube — besting What If…?, WandaVision, The Falcon and The Winter Soldier, and Loki.

As Marvel fans eagerly await the November 24 premiere of Hawkeye on Disney+, let’s get to know Kate Bishop — her abilities, history, and her relationship to Clint, the Hawkeye mantle, and the Young Avengers.

Who will play Kate Bishop in Hawkeye?

Who will play Kate Bishop in Hawkeye? The character of Kate Bishop will make her Marvel Cinematic Universe debut in Hawkeye, played by the Academy Award-nominated actress, Hailee Steinfeld. Hailee Steinfeld leads the Hawkeye ensemble alongside Jeremy Renner, making his first live-action appearance in the MCU since Avengers: Endgame (2019).

Who is Kate Bishop to Hawkeye?

In the pages of Marvel Comics, Kate Bishop uses her family fortune and keen marksmanship to take on the mantle of Hawkeye. In the comic book timeline, the Avengers had broken up and Clint Barton was dead. In the absence of the Avengers, Kate Bishop became a founding member of the Young Avengers as the new Hawkeye. Clint Barton was revived by Scarlet Witch, who altered reality and re-wrote Earth’s history following the events of the massive comic crossover storyline, House of M. When Clint returned, he eventually took on Kate Bishop as his protégé — training her to share the Hawkeye mantle.

In the Marvel Cinematic Universe, Hailee Steinfeld’s Kate Bishop appears to follow a similar path to her comic book counterpart. Clint Barton didn’t die in the MCU as he did in the comics. Following the events of Avengers: Infinity War (2018) and the loss of his family to the snap of Thanos (Josh Brolin), he goes underground to battle organized crime as blood-thirsty vigilante, Ronin. Barton eventually gives up his violent alter ego in Endgame, and his family is brought back. According to the Hawkeye trailer, it looks like Clint’s past as Ronin will indeed come back to haunt him. He’ll team-up with fellow sharpshooter — and Clint Barton superfan — Kate Bishop to battle the criminal underworld once plagued by Ronin.

How old is Hailee Steinfeld’s Kate Bishop in the Marvel Cinematic Universe?

Hawkeye actress, Hailee Steinfeld turns 25 this year. While it’s unknown exactly what age Kate Bishop when we meet her in Hawkeye, in the comics, Young Avengers Vol.2, Bishop’s age is 21. Most other comic book versions of the character depict Kate in her early or mid-twenties — right in line with Hailee Steinfeld’s actual age. In the Ultimate Marvel comic book timeline, the Kate Bishop character is just 16.

Some fans have conflated the characters of Kate Bishop and Hawkeye’s daughter, Lila Barton. Kate Bishop, while inspired by Hawkeye, has no blood relation to Clint Barton. Lila Barton was portrayed by twin sisters Isabella and Imogen Poynton in Avengers: Age of Ultron (2015). Lila Barton was played by Ava Russo — daughter of director Joe Russo — in Avengers: Infinity War, Avengers: Endgame, and will reprise the role in the Disney+ Hawkeye series. Lila and Clint Barton’s entire family were snapped out of existence by Thanos in the prelude to Avengers: Endgame and eventually returned along with half the universe following the Avengers’ defeat of Thanos and the Infinity Gauntlet.

How does Kate Bishop fit into the Marvel Cinematic Universe?

How is Kate Bishop introduced in the MCU?

A synopsis of Hawkeye recently appeared in TV Guide Magazine’s Fall Preview issue and was shared by redditor, magikarpcather (via ScreenRant) that has shed some light on how Kate Bishop will be introduced in the Marvel Cinematic Universe. According to the synopsis, we can expect Clint and Kate to have a similar relationship to the one the share in Marvel Comics:

“In this holiday tale set in snowy New York City, Clint Barton aka heroic archer Hawkeye (Jeremy Renner), gives a truly great gift, passing the bow and arrow on to a new generation. The recipient: Kate Bishop (Hailee Steinfeld), a young warrior who worships the Avenger and spent years training to be like him.”

Clint and Kate will meet for the first time in the events of Hawkeye. The synopsis says that Clint, “…has no clue who [Kate Bishop] is and doesn’t really understand her obsession for him.”

Why is Kate Bishop dressed as Ronin in the Hawkeye trailer?

Following the loss of his entire family at the Infinity Gauntlet-ed hand of Thanos, Clint Barton takes out his sorrow on the criminal underworld as ruthless vigilante, Ronin. Now that the the Blip has passed, and his family is back, Clint is looking to leave his past behind him. However, his bloody one-man-war on criminal gangs seems to be coming back to haunt him. 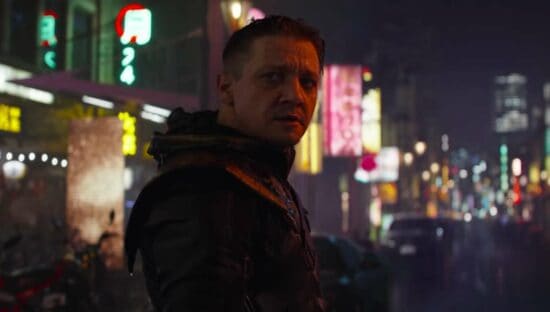 The NY1 news reports in the Hawkeye trailer signal that Kate Bishop’s dark, hooded disguise leads the public to believe that Ronin is back.

Is Kate Bishop a Young Avenger?

The Kate Bishop character was introduced into Marvel Comics continuity as the second Hawkeye in Young Avengers #1 (2005). She is considered a founding member of the Young Avengers, and was the co-head of the team alongside Captain America disciple, Patriot. Both Clint Barton and Bishop have been part of the West Coast Avengers line-up as well.

What are the powers and abilities of Kate Bishop?

Kate Bishop is a master marksman and archer and has been known to keep specialty or “trick” arrows in her quiver — like explosive-tip arrows, sonic arrows that emit a high-pitched blast of sound, and cable arrows that unreel high-tensile strength cable for climbing or repelling.

While Bishop doesn’t posses any inherent superpowers, she is highly skilled in several combat disciplines like her mentor, Clint Barton. Kate is highly skilled with swords and battle staves, and is trained in various martial arts and hand-to-hand combat forms like jiu jitsu and kickboxing.

In the popular video game, Marvel’s Avengers from Square Enix, Kate Bishop is a playable character. In Marvel’s Avengers, in addition to being equipped with trick arrows — like razor arrows, and scatter-shot arrows — Bishop utilizes AIM technology to wield quantum energy, enabling her to teleport short distances.

Which comics about Kate Bishop should I read before Hawkeye?

What is Hailee Steinfeld’s background?

Hawkeye‘s Hailee Steinfeld is an actor, model, and singer known primarily for her roles in films like Pitch Perfect 2 (2015), Ender’s Game (2013), and voicing Spider-Gwen in Spider-Man: Into the Spider-Verse (2018). Hailee Steinfeld began acting at 10 years old and saw her star rise when she was just 13 thanks to her breakthrough role in the film True Grit (2010). The role earned Hailee Steinfeld an Academy Award nomination and international recognition.

What movies was Hailee Steinfeld in?

Where have you seen Hawkeye actress Hailee Steinfeld before? She’s primarily known for the following film roles:

Are you excited to see Hailee Steinfeld bring Kate Bishop to life in Hawkeye? Let us know in the comments!

Comments Off on Who Is Kate Bishop in Marvel’s ‘Hawkeye?’