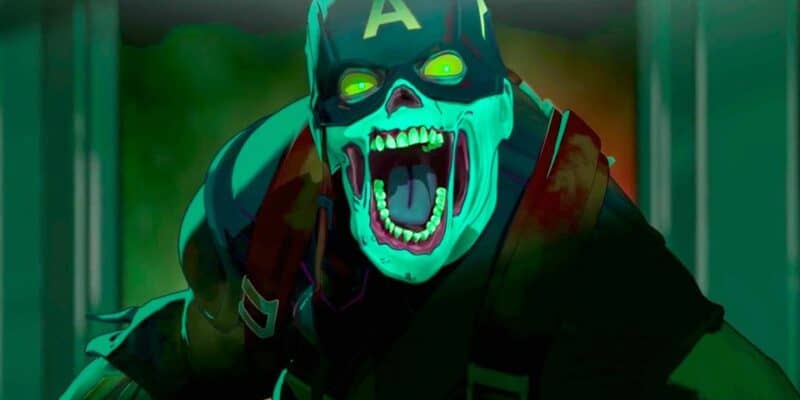 It looks like the Marvel Cinematic Multiverse is continuing to expand at Disneyland Resort.

Disney Parks have revealed a zombie character from the Disney+ series What If? will be appearing at Disney California Adventure’s Oogie Boogie Bash this Halloween season!

Disney announced the exciting news on their TikTok:

‘Zombie Captain America’ appeared in the fifth episode of Marvel’s What If…?, aptly titled “What If…Zombies?”, which took Marvel fans into one of the most popular Marvel Comics – Marvel Zombies.

In the episode streaming on Disney+, Bucky Barnes is seen battling an undead Captain America, with many other popular Marvel heroes also succumbing to the zombie virus.

This zombie version of Captain America (played in the MCU by Chris Evans) will appear at Disneyland Resort’s Oogie Boogie Bash – A Disney Halloween Party, being held at Disney California Adventure this year.

The event — which first debuted during the 2019 Halloween season but was unable to be held in 2020 due to the theme parks closures amid the ongoing pandemic — quickly became a Guest-favorite separately ticketed party at the California Disney Resort.

The event is now sold out for 2021, as noted on the Oogie Boogie Bash webpage on the Disneyland Resort official website, as of Saturday, October 16:

Below is the official description for Oogie Boogie Bash:

The official description of What If…? reads:

‘What If…?’ flips the script on the MCU, reimagining famous events from the films in unexpected ways. Marvel Studios’ first animated series focusses on different heros from the MCU, featuring a voice cast that includes a host of stars who reprise their roles. The series is directed by Bryan Andrews; A.C. Bradley is head writer.

Are you going to Disneyland’s Oogie Boogie Bash? Let us know!