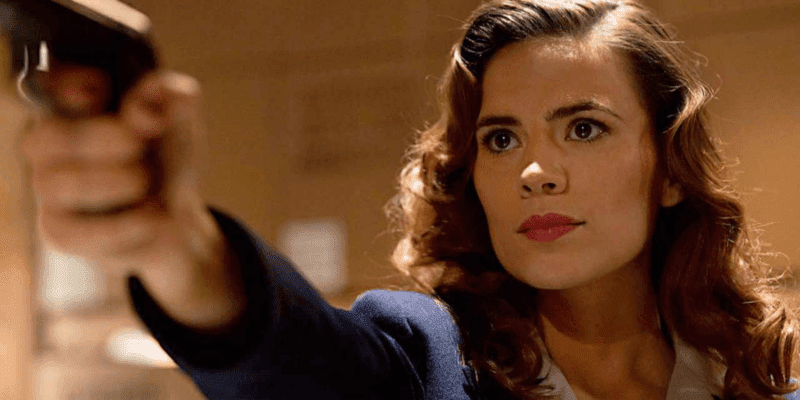 Marvel’s upcoming What If…? original series is premiering on Disney+ this Wednesday, and the official Captain America Twitter account recently replaced Sam Wilson with Peggy Carter to promote the new show. But some Marvel fans aren’t happy about it.

Related: Marvel Comic Writer is “Sick to His Stomach” After Seeing MCU Success

Following the success of The Falcon and the Winter Soldier, WandaVision, and Loki, What If…? will be Marvel’s first animated series on Disney+ and will reportedly have as much of an effect on the future of the Marvel Cinematic Universe as Loki.

The Falcon and the Winter Soldier debuted between WandaVision and Loki and showcased the major character development of Bucky Barnes/Winter Soldier (Sebastian Stan) and Sam Wilson/The Falcon (Anthony Mackie) into the White Wolf and new Captain America, respectively.

In the MCU, Sam Wilson is the first Black Captain America, and Peggy Carter (Hayley Atwell) is the first female version of the character.

Some of the earliest trailers and teasers for Marvel’s What If…? including Peggy Carter, Steve Roger’s love and eventual wife, taking the mantle, picking up the shield, and becoming Captain Britain.

In What If…?, Sharon Carter takes the super soldier serum instead of Steve Rogers, making her the first Avenger. Taking the Captain America shield as her own, Captain Britain is one of the first earth’s mightiest heroes during World War II.

According to IMDb, the series is “reimagining noteworthy events in the Marvel Cinematic Universe and creating a multiverse of infinite possibilities,” according to IMDb.

Another fan, lyn, shared her feelings:

people are mad but we’re right to be upset about them erasing sam?? especially because CAPTAIN CARTER ISNT CAPTAIN AMERICA!!! shes not even american yall got the whole union jack on her suit and shes their new layout and people think its cool that she replaced sam wilson?

people are mad but we're right to be upset about them erasing sam?? especially because CAPTAIN CARTER ISNT CAPTAIN AMERICA!!! shes not even american yall ? got the whole union jack on her suit and shes their new layout and people think its cool that she replaced sam wilson? https://t.co/98c41usKwG

Another Marvel fan, @armorwars, made an interesting point:

will only accept this if they also changed @Guardians account to a picture of t'challa as star-lord or something because this is really weird to remove sam wilson like that when you could just market this show through… you know… @whatifofficial https://t.co/bnAo6bZIL9

Some Sam Wilson fans are voicing their distaste for Captain Britain taking Sam Wilson’s spot at Captain America on Twitter, but, presumably, he’ll eventually make his way back to the account.

The entire series revolves around endless timelines telling a different version of classic Marvel stories, so Sharon Carter isn’t the new Captain America in the sacred Earth-616 timeline. Instead, she is Captain Britain in an alternate timeline in the Marvel Universe.

Nonetheless, this isn’t the first bit of controversy sparked by the upcoming original series. In July, news broke that Doctor Strange and Captain Marvel would be voiced by different actors, not by Benedict Cumberbatch and Brie Larson, respectively.

The 10-episode series will interweave the stories of MCU characters and reportedly affect the overall Marvel Universe as much as Loki has. What If…? debuts Wednesday, August 11, 2021, on Disney+.

What do you think of this Twitter change? Let us know in the comments below!