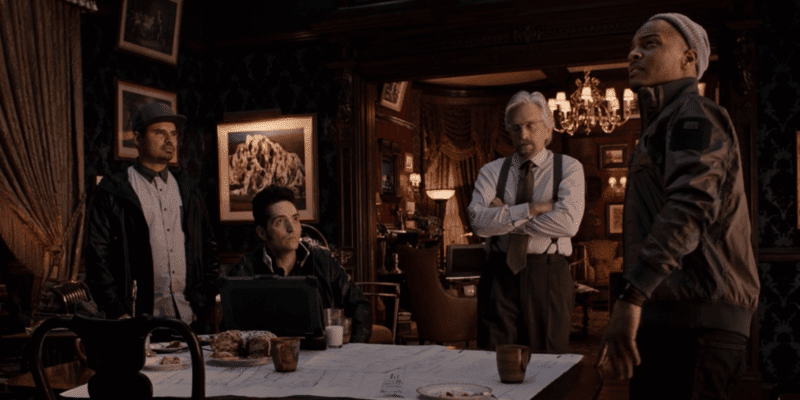 Even though it doesn’t release until 2023, Ant-Man and the Wasp: Quantumania is already hugely anticipated. The sequel to Ant-Man (2015) and Ant-Man and the Wasp (2018) sees the return of Paul Rudd’s Scott Lang and Evangeline Lilly’s Hope van Dyne to the Marvel Universe.

The titular duo will be joined by returning cast members Michael Douglas (Hank Pym) and Michelle Pfeiffer (Janet van Dyne) with Jonathan Majors and Kathryn Newton joining the new Marvel movie as villain Kang the Conqueror and Cassie Lang, respectively. We don’t yet know if anyone else from the original films’ casts will be returning and one actor has revealed even he does not know if he will be coming back for the threequel.

Coming from director Peyton Reed, who also helmed the first two installments in the Ant-Man franchise, Ant-Man and the Wasp: Quantumania is set for release in February 2023 as part of Kevin Feige’s Marvel Cinematic Universe Phase 4. Reed confirmed recently that the third film has started principal photography and members of the cast received their scripts a couple of months ago, so it’s clear that progress is underway.

Nothing is yet known about the plot of the Ant-Man and the Wasp: Quantumania but with Major confirmed as the classic villain Kang the Conqueror and Loki setting up the net big Thanos-like event in the MCU, it is likely to be action-packed and integral to Marvel’s future plans of Phase 5 and beyond.

While the Ant-Man franchise doesn’t boast the biggest box office performances when considered next to other MCU outings like Captain America: Civil War (2016), Black Panther (2018), and both Spider-Man movies, it has cemented a strong fanbase if not for its inherent silliness, comedy, and, well, Paul Rudd-ness.

One of the fan-favorite aspects of both Ant-Man and Ant-Man and the Wasp is the comedic criminal group of Luis (Michael Peña), Dave (Tip “T.I.” Harris), and Kurt (David Dastmalchian). The trio was first introduced in the original 2015 venture as members of Scott Lang’s crew and quickly became the comical highlights of the first two movies, eventually setting up the X-Con Security Consultants Company in the 2018 sequel. Peña’s hilarious recitals of entire events as Luis have become the must-watch elements of the MCU movies.

That being said, it is not yet confirmed if these three characters will be joining Rudd’s and Lilly’s Marvel Comics characters in Reed’s next Ant-Man installment. However back in March, “T.I” was involved in a sexual abuse case, potentially meaning he is out of Ant-Man and the Wasp: Quantumania. It also seems unlikely that the character will be recast. Also, the role of Cassie Lang will now be played by Kathryn Newton instead of Emma Fuhrmann, who starred as Scott Lang’s daughter in Avengers: Endgame (2019).

Speaking to ComicBook, Kurt actor David Dastmalchian revealed he does not yet know his Ant-Man future:

“Well, unfortunately with the world of Ant-Man… I honestly don’t know where I’m going next. Right now I’m actually working on an R… I think it’s an R-rated movie, The Last Voyage of the Demeter…”

Dastmalchian has most recently starred in James Gunn’s The Suicide Squad (2021), the reboot of the DC Extended Universe’s Suicide Squad (2016). The actor plays Polka-Dot Man alongside Margot Robbie’s Harley Quinn, Idris Elba’s Bloodsport, and John Cena’s Peacemaker, among others. In fact, he also shared how switching from Marvel to the DC comic book movie has affected his family.

“…having come from Ant-Man, a really fun family-friendly PG movie, to The Suicide Squad, the only drawback… I mean, it’s awesome that James [Gunn] could go as bonkers as he wanted to go with the violence and the language and all of the comedy. But the only sad thing about all of that is I have two kids in my house who are so freaking excited about a movie that they are not going to see for about another six or seven years and they don’t know that yet.”

While Dastmalchian’s unconfirmed role in Ant-Man and the Wasp: Quantumania might mean Peña’s Luis is out of the third installment, the actor did sign a three-film deal with the Marvel Studio so it’s pretty likely he will make an appearance here.

With lips tightly sealed on the Ant-Man front, we do know a couple of things. Corey Stoll is rumored to be returning as the villain Darren Cross AKA Yellowjacket in some capacity — Lilly recently posted a photo of Jeff Loveness’s script and tagged the House of Cards actor before quickly removing then deleting the post altogether. We also know that the production did secretly film elements in San Francisco before principal photography began.

Then there’s that title — it can be expected the Quantum Realm will feature heavily in the film.

That being said, with the filming now officially underway and the script already in the hands of its actors, it doesn’t look like Dastmalchian will be reprising his role as Kurt in this third movie. Although stranger things have happened, especially when it comes to Marvel Studios.

Are you hoping more of the original cast will return for Ant-Man and the Wasp: Quantumania? Let us know in the comments!