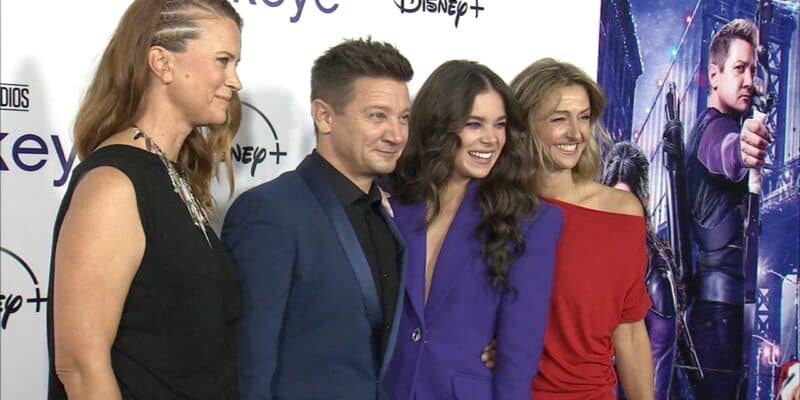 As Marvel fans look forward to the premiere of the MCU’s next Disney+ Original series, Hawkeye, starring Jeremy Renner (Clint Barton/Hawkeye) and Hailee Steinfeld (Kate Bishop), they are more than ready for any and all details about the highly-anticipated series, which will take place approximately two years after the events of Avengers: Endgame (2019).

Following the deaths of Tony Stark/Iron Man (Robert Downey, Jr.) and Barton’s close friend, Natasha Romanoff/Black Widow (Scarlett Johansson), in Endgame, fans are about to see a version of the MCU’s most famous archer they haven’t previously witnessed.

Barton is dealing with at least some measure of survivor’s guilt as he embarks on a New York City Christmas vacation with his children — when, predictably, chaos will ensue, as it almost always does for the Avengers crew.

Although the Big Apple has long played a role in the Marvel Universe, first in Marvel Comics and now in the Marvel Cinematic Universe  — NYC will also feature heavily in Spider-Man: No Way Home on December 17 — Hawkeye executive producer Rhys Thomas recently shared that he was a little bit tyrannical about making sure the city was presented authentically in this show specifically.

During a Hawkeye press conference, Thomas was asked about putting the cast and crew “on the ground” in Manhattan as opposed to using green screen technology or a soundstage like The Volume, which has been made famous by The Mandalorian production team. He shared:

“New York’s very special to me anyway. I think I was kind of a tyrant about, um, being as true to New York as we could. Nothing bugs me more than fake geography in movies, and fake texture and, so, yeah, I think it was a given that we had to go there…It’s Christmas time in New York too. You want that real texture. Um, plus, we’ve got, you know, very human characters in the show as well, so I think anywhere that real world feel can-can breathe through the show, then, um, yeah, we had to take it.”

Leading man Renner went on to share some details about the realness of the characters that Thomas alluded to in his comments — intriguingly enough, the contrast of light and dark in the characters’ personalities is a foil to the gritty underbelly of NYC when compared to the glitz and glamour of the city as a whole:

“But it [Barton’s survivor’s guilt] ultimately comes from just the weight, and the horrors, and the tragedies, and loss that come with the game. It’s managing losses, is the super hero game, and, um, the lightness and brightness that Hailee’s character brings in, it kinda counteracts that and comes in and kinda gets it to level out some. So, it’s pretty cathartic, and I think quite beautiful.”

What do you think about the role New York City is set to play in the Hawkeye series?