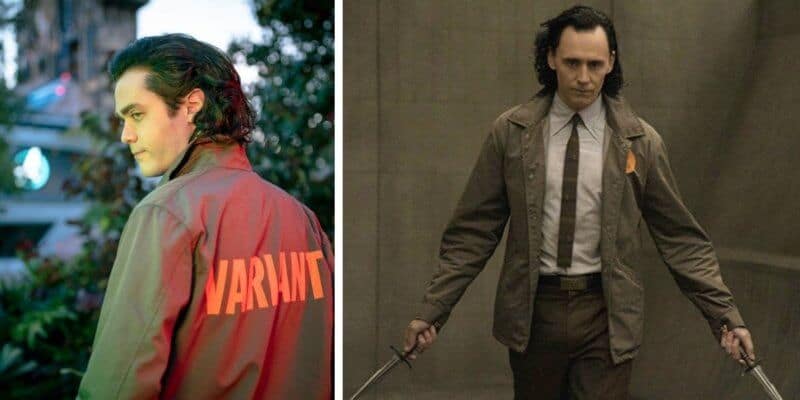 Avengers Campus at Disneyland Resort is now open, and Guests of Disney California Adventure can step into the Marvel Cinematic Universe! Not only is the land incredibly detailed, from the buildings to the giant Quinjet, but the character interactions are incredibly immersive as well.

Spider-Man flies through the air to attend his meet and greet, while battles take place between Black Widow, Captain America, and more Avengers right before the eyes of Guests. It truly does feel like Guests are walking into their very own Marvel film.

Now that Loki is debuting on Disney+, not only are Disney fans watching the story unfold on television, but Avengers Campus is carefully following the storyline as well.

When the show was released to record-breaking audience numbers on June 9, Guests could find Loki in Avengers Campus dressed in his prison garb, as he was captured by the TVA (Time Variant Authority) in Episode 1 titled Glorious Purpose, and that was his main source of clothing.

Now that Episode 2, “The Variant,” is out, Loki has a new outfit in the parks! The TVA gave him a jacket to wear that was a lot more business-like than a prison outfit; however, they also titled Loki as a “VARIANT” on the back of the jacket.

Disney Parks (@DisneyParks) took to Twitter to show off the new look.

The TVA is taking over Avengers Campus! Check out Loki’s latest look at Disney California Adventure park and catch up with #Loki now streaming on @DisneyPlus

The TVA is taking over Avengers Campus! Check out Loki’s latest look at Disney California Adventure park and catch up with #Loki now streaming on @DisneyPlus! pic.twitter.com/7snl7W8mgP

As Bob Chapek noted in a Q&A earlier this week, Disney is planning on using their shows and parks in tandem to help tell stories while cross-promoting their different avenues — which is exactly what we see here. Avengers Campus joins in on the Disney+ reveals each week by placing the show’s story in the theme park, immersing Guests further.

But, without an Annual Passholder audience, will this tactic be well-received? Sally (@SCJacka) made a good point regarding the storytelling approach the Disney Park is taking with Loki, noting that an Annual Pass crowd would be able to interpret the story of Loki in the parks much better than a one-time visit Guest.

I don’t want to sound like “that guy” but evolving things like this in the park play much better to an AP crowd https://t.co/ikzcf5V22w

Although any Guest who follows the show will know that the park has the most up-to-date version of Loki on display, an Annual Passholder who could visit every week would likely have even more exciting because they could watch the story unfold in real-time.

That being said, it is still fascinating to see how Disney is evolving characters in the parks in respect to their Disney+ shows. Loki seems to be the first character to transform in real-time like this, so it will be interesting to see if this form of storytelling in Avengers Campus continues as more Disney+ shows continue to release in the future.

Do you think that Disneyland needs Annual Passholders to tell a weekly story such as Loki’s? Let us know your thoughts in the comments below!