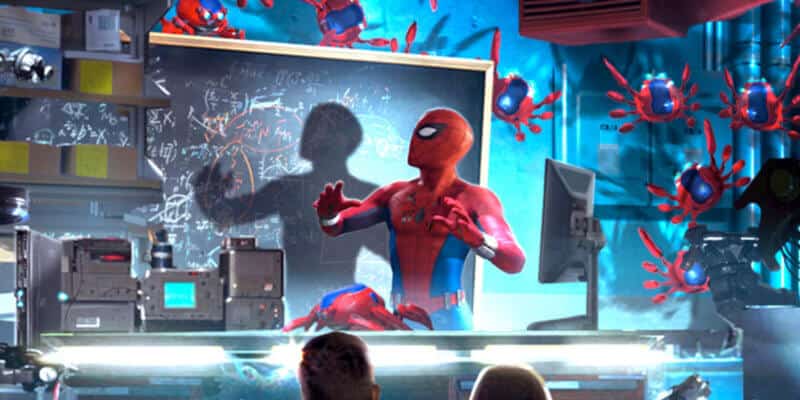 At Disneyland Paris, Guests are gearing up to learn of the opening day of Avengers Campus at Walt Disney Studios Park. The land has been under construction for a couple of years now and is set to debut this summer following Disney California Adventure’s debut last June!

At DCA, Guests can enjoy WEB SLINGERS: A Spider-Man Adventure which is the newest interactive ride that can be found at Disney California Adventure Park and puts you right in the heart of Avengers Campus.

Your adventure begins at Avengers Headquarters in the WEB — Worldwide Engineering Brigade — facility, where Peter Parker (played by actor Tom Holland) is going to show you some of the exciting new technology being designed by young geniuses from around the world — including his new robotic sidekick, the Spider-Bot. Unfortunately, things go a little haywire during the presentation.

Disneyland Paris will have a similar version of the attraction in their Avengers Campus, but it looks like the ride will undergo a name change. DLP Dream (@DreamDlp) stated:

NEWS ALERT! The official name of the Spider-Man attraction at Disneyland Paris’ Avengers Campus land will be “Spider-Man WEB Adventure”.

Similar to Disneyland Resort, Walt Disney Studios Park’s Avengers Campus will feature Spider-Man WEB Adventure, Doctor Strange: Journey Into the Mystic Arts, and an anxiously-awaited Iron Man retheme of Rock ‘n’ Roller Coaster Starring Aerosmith. Even as concept art and ride details have been trickling in, the name of the future superhero attraction has remained unknown.

As we have reported, Disneyland Paris Communication Officer, Clément Gonier (@cgonier), has shared the new television commercial which quietly features the new name of the Marvel retheme.

Here’s your first look at the epic TV ad of Avengers Campus at @DisneylandParis! Opening this Summer

Here’s your first look at the epic TV ad of Avengers Campus at @DisneylandParis! Opening this Summer 💥 pic.twitter.com/JzsuZZAkLg

In the video, we saw a new name debut: Avengers Assemble: Flight Force.

We have recently seen Disney’s Sequoia Lodge reopen while the Disneyland Paris Resort continues to undergo a refurbishment. On top of that, we have seen price increases for pins! The Disneyland Paris app has also changed; read more on that here. Disney Stars on Parade is also back at Disneyland Park now that the holidays are over! Guests looking to skip the line can also purchase Premier Access, which is a pay-per-ride system that allows Guests to skip the standby line.

Disneyland Paris’s Space Mountain, which is currently Hyperspace Mountain, will be closed from May 30 to June 10, most likely so it can be reverted back to its original version. RC Racer will be closed from June 13 to 17 June. The two other attractions, La Cabane des Robinson and Les Mystères du Nautilus are closed, and both do not have an official return date yet. For more on Disneyland Paris’s refurbishment schedule, click here.

What do you think of the new attraction name?