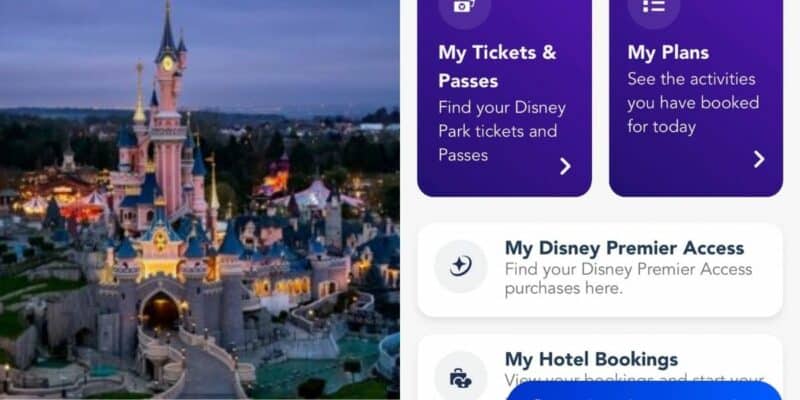 Disneyland Paris is making some changes for the 30th anniversary, which is around the corner! As of March 6, 2022, Disneyland Paris will be in full-celebration swing, and all of their preparations will pay off!

Sleeping Beauty Castle has been revealed to Guests; Orbitron just finished its lengthy refurbishment as well. Big Thunder Mountain has just closed for a refurbishment, and Fantasyland is heading towards its refurbishment completion. There are a lot of other changes happening, and now the Disneyland Paris app has received an update. DLP Report (@DLPReport) noted and shared photos of the change on Twitter. It seems the “Account” section will now better allow Guests to link tickets in the app and manage their bookings, reservations, and show language.

The official Disneyland Paris App has been updated with a rework of the “Account” section, allowing to link tickets in the app, better management of bookings and reservations, and display of the show’s languages.

📲 The official Disneyland Paris App has been updated with a rework of the “Account” section, allowing to link tickets in the app, better management of bookings and reservations, and display of the show’s languages. pic.twitter.com/36TLNWAPk0

With more tourism heading to Disneyland Paris in the next few months, this change will help Guests to understand that app much easier.

At Walt Disney World and Disneyland, we have seen both Park apps see changes. Both the Disneyland App and My Disney Experience have added Disney Genie to the system. The Disney Genie system allows for Guests to have their day planned by the Genie in Aladdin! Well, really, is it a programmed add-on to the My Disney Experience app that gives Guests suggestions based on their location on what to do next.

Disney Genie also has Disney Genie+! For $15.00 per day person at Disney World or $20.00 per person per day at Disneyland, you can skip one standby queue at a time by booking your reservation for the Lightning Lane line, which is the new FastPass queue. You can only book one reservation at a time or one every hour, but remember to start this early in the morning as we have seen attractions sell out of Lightning Lane spots by mid-afternoon!

Disneyland Paris has a semi-similar aspect on their account when it comes to Disney Genie+; however, it is called Premier Access. Costs are for select attractions, and all must be purchased separately, per person, per ride. Pricing varies but generally sticks around the following:

At Disneyland Paris, many other changes are also being worked on, and potential changes forthcoming.

What do you think of the new Disneyland Paris app changes?