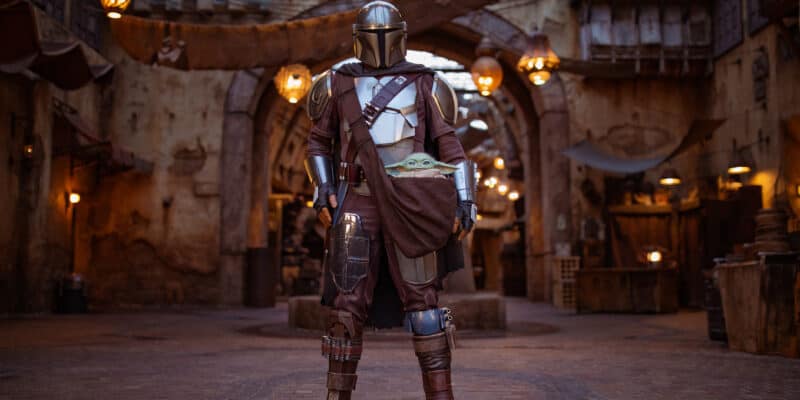 After years of waiting, fans will finally be able to meet Din Djarin, The Mandalorian, and Grogu, Baby Yoda, at Disney Parks!

Disney just dropped a ton of exciting announcements, including opening dates of highly anticipated lands and attractions like World of Frozen at Hong Kong Disneyland and TRON Lightcycle Run at Walt Disney World Resort, more details on the fun retheming of Splash Mountain, opening as Tiana’s Bayou Adventure in 2024, and even some very exciting teases of projects that could come to Magic Kingdom and Disney’s Animal Kingdom inspired by Coco (2017), Encanto (2021), Zootopia (2016), Moana (2016), and an idea inspired by Disney Villains.

From all-new nighttime spectaculars to ongoing upgrades and new lands coming to Disney Parks worldwide, there are plenty of reasons for Disney fans to be excited. However, one particular announcement will have fans of the Star Wars franchise eager to visit Disneyland Resort.

Disney Parks (@DisneyParks) posted a photo of this exciting moment for fans of the Star Wars franchise and Disneyland Guests.

This is the way! @Jon_Favreau joined Josh D’Amaro with @TheMandalorian and Grogu on stage at #D23Expo!

This is the way! ✨ @Jon_Favreau joined Josh D'Amaro with @TheMandalorian and Grogu on stage at #D23Expo! pic.twitter.com/iYfNlXuZlf

Per Disney Parks, the Mandalorian and Grogu will meet Guests inside Star Wars: Galaxy’s Edge at Disneyland Park starting mid-November!

We have our first look at the Mandalorian and Grogu before they begin encountering guests inside Star Wars: Galaxy’s Edge at Disneyland Park beginning in mid-November! #D23Expo

We have our first look at the Mandalorian and Grogu before they begin encountering guests inside Star Wars: Galaxy’s Edge at Disneyland Park beginning in mid-November! #D23Expo pic.twitter.com/zb2PhWp0ui

Disney Parks (@disneyparks) also shared an exciting look at this beloved character from the Star Wars universe on TikTok. You can see the video below or click here to watch it.

Earlier this year, Disney announced the arrival of the legendary bounty hunter Boba Fett (Temuera Morrison) and mercenary Fennec Shand (Ming-Na Wen) to the California theme park, mentioning that Din Djarin (Pedro Pascal), known as the Mandalorian, and Grogu, the child who found protection with Mando, would join them at a later time, which has fortunately arrived at last!

The arrival of these characters opens a whole galaxy of possibilities, as Guests will be able to meet and interact with different characters from the ever-expanding Star Wars universe when they visit Star Wars: Galaxy’s Edge at Disneyland Resort.

As of this article’s publishing, Disney had not released information regarding the arrival of the Mandalorian and Grogu at Star Wars: Galaxy’s Edge in Disney’s Hollywood Studios. Inside the Magic will update you as soon as any information is released regarding these popular characters’ arrival at Walt Disney World Resort.

Are you excited to meet Mando and Grogu at Disneyland Resort soon? Let us know in the comments below!