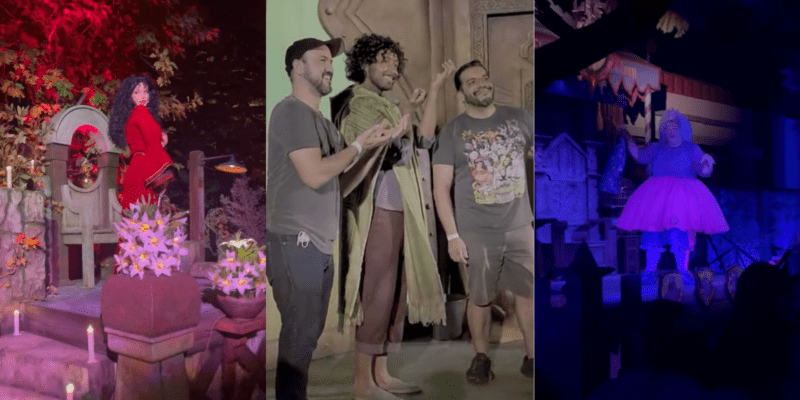 Not all fans are happy about the arrival of several new characters at Disneyland Resort for the Park’s Halloween celebrations.

Disneyland Resort officially started the Park’s fall and Halloween celebrations on September 2, with transformed attractions, characters in new seasonal looks, themed décor, delicious treats and eats, festive merchandise, and more! Perhaps the highlight of Halloween celebrations at Disneyland is the Oogie Boogie Bash, which takes place at Disney California Adventure on select nights from September 6 to October 31. This year promises to be the most frightfully fun with several new characters joining the party.

Earlier this year, Disneyland teased the arrival of two new characters to this year’s Oogie Boogie Bash. While the Park didn’t release any official information on who these characters would be, fans quickly figured out that Mother Gothel from Tangled (2010) and Madam Mim from The Sword in the Stone (1963) would join Oogie Boogie for some spooktacular fun.

Mother Gothel was perhaps the first character whose appearance was unofficially confirmed, as several Guests spotted her stage set up at Disney California Adventure a few weeks ago. And thanks to Cast Member previews earlier this week, fans have seen her debut at the Park in all her radiant beauty.

Alice (@aliceadroite) shared a video of Mother Gothel during Cast Member preview nights you can see below.

Alice also shared a video of Madam Mim interacting with some Cast Members during the preview events.

However, these two iconic characters were not the only ones to join the party. Disney also included some surprise characters who made their debut for this year’s Halloween celebrations at Disney California Adventure.

One of these surprise characters was Bruno from Disney’s Encanto (2021), who, understandably, Disneyland didn’t talk about until this preview event. Leota (@miladyofdisney), who also attended the Cast Member preview, shared a video of Bruno interacting with a couple of Cast Members during the event.

A bit of Bruno.

However, perhaps the most discussed character arriving at Disney California Adventure for the Oogie Boogie Bash is Ernesto de la Cruz, from Disney and Pixar’s Coco (2017), who shocked Cast Members and will surely blow Guests away with the extreme detail this realistic character shows. Scott Gustin (@ScottGustin) shared a video of de la Cruz performing “Remember Me” during the preview event at Disney California Adventure.

Related: Disney Puts Money Where Their Mouth Is With Unreal New Meet and Greet

While these new characters will make this year’s Oogie Boogie Bash a night to remember for Guests lucky enough to have a ticket for the exclusive event, not all fans are happy with the debut of so many new characters at Disneyland Resort. Kris (@klf3681), for example, commented that while Disneyland welcomed new characters into the Park, Disney World said goodbye to 13 characters, though he didn’t specify which ones.

Something, something…Be fair to Florida.

This topic is constantly discussed online, with Guests commenting on how they wish Disney World welcomed as many new characters as Disneyland. Perhaps the most recent example of this has been the arrival of Mirabel from Encanto to Walt Disney World earlier this year after she had already appeared at Disneyland Park and Disney California Adventure for several months.

Many Guests have also commented on the several superheroes who have made their way to Avengers Campus at Disney California Adventure, including Moon Knight, Scarlet Witch, America Chavez, Ms. Marvel, Shang-Chi, and Mighty Thor, as well as characters from the Star Wars franchise debuting at Star Wars: Galaxy’s Edge in Disneyland Park, including Boba Fett and Fennec Shand, with The Mandalorian and Baby Yoda, announced to arrive at a later date.

While adding some of these new characters would be complicated at Walt Disney World for several reasons, especially characters from the Marvel Cinematic Universe, many fans want to be able to meet more of their favorite characters in the Disney Parks at Orlando. Whether or not Disney will oblige to these requests is still to be seen, as the Parks have not released any official information regarding the arrival of new characters to the Orlando Parks.

Oogie Boogie Bash is the highly anticipated Halloween event at Disney California Adventure, which will take place on select nights in September and October this year. Tickets for this exclusive event sold out almost instantly, proving this popular event’s high demand among Disney fans.

Guests lucky enough to have a ticket to the event will be able to meet some of Disney’s most famous villains, including Dr. Facilier from The Princess and the Frog (2009) and Maleficent from Sleeping Beauty (1959), as well as some returning favorites like Agatha Harkness from WandaVision (2021), Sid from Toy Story (1995), and Cruella de Vil from Cruella (2021).

Inside the Magic prepared a Guide with all you need to know about this spooktacular event. You can click here to read it.

Disney California Adventure has so many fun things to do! Guests can enjoy Buena Vista Street as they walk the roads Walt had in Hollywood, pick up a mouth-watering hot dog at Award Wieners, and head to Cars Land to enjoy the neon signage and Radiator Springs Racers. Fans of the MCU can visit Avengers Campus and join their favorite superhero on exciting missions on WEB SLINGERS: A Spider-Man Adventure and Guardians of the Galaxy – Mission: BREAKOUT! Guests can also enjoy the Pixar Pal-A-Round on a swinging or non-swinging gondola, learn to fly at Goofy’s Sky School, rock on the Silly Symphony Swings, and catch Jack-Jack on Incredicoaster! The list of rides and attractions never ends!

And there is so much for Guests to enjoy at Disneyland! Walking up to Sleeping Beauty Castle is always a dream, especially when you get to go inside and relive the story of Aurora and Maleficent. Riding classics like “it’s a small world,” Pirates of the Caribbean, Mr. Toad’s Wild Ride, The Haunted Mansion, Matterhorn Bobsleds, Splash Mountain, and more will have you feeling the magic and craving a churro! Toontown is currently gearing up for a massive change which will be revealed in 2023 with the reopening of the land and the debut of Mickey and Minnie’s Runaway Railway. At Disneyland, Guests can now enjoy Star Wars: Galaxy’s Edge for some blue milk or green milk and ride Rise of the Resistance and Smuggler’s Run.

Will you attend Oogie Boogie Bash this year? Would you like to see more characters coming to Walt Disney World soon? Let us know in the comments below!