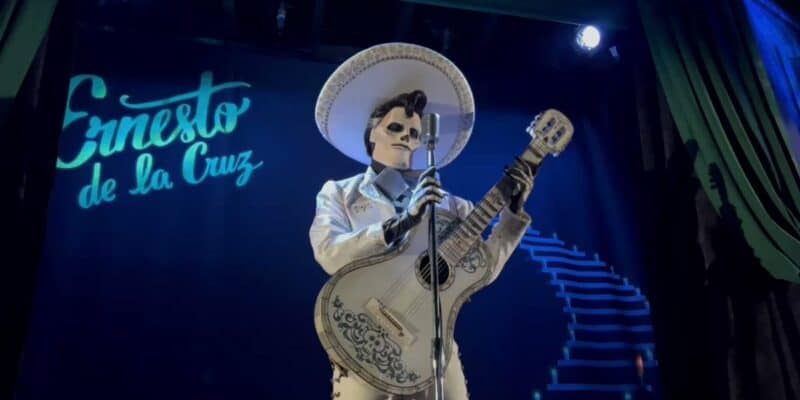 Disney is actually putting their money where their mouth is when it comes to this “amazing” new experience this Fall.

The Halloween Party event is detailed as follows:

While the ticketed event is officially sold out (in 24 hours, no less!), the festively spooky party themed after Tim Burton’s The Nightmare Before Christmas (1993) character, Oogie Boogie, is sure to give Disney fans an up-close-and-personal experience — including what might be one of this year’s unprecedented star draws — the Ernesto de la Cruz Treat Trail.

This year’s Oogie Boogie Bash is shaping up to be pretty extraordinary this year (check out our definitive guide to the Halloween event!), with videos already cropping up on social media showing off a stunning new experience at the Halloween Party held at Disneyland Resort’s Disney California Adventure Park.

The melody and performance are made particularly eerie with the knowledge that this song was in fact stolen by the character Ernesto de la Cruz from Coco‘s Héctor (Gael García Bernal), the late musician who was protagonist Miguel’s (Anthony Gonzalez) great-great-grandfather, and the eponymous Mamá Coco’s (Ana Ofelia Murguía) father.

The performance features what many are calling Disney’s best costume character experience yet, with Ernesto de la Cruz’s spooky skeleton face and hands looking freakishly real as he works the crowd:

This spooky spectacular is going down overwhelmingly well among Disney Park Fans, as users online chime in with how impressed they are at the sheer quality of this experience.

Twitter user @disneywiththegrogu says they’d happily get their wallet out to experience this in real life:

I would drop an extra $50 to see this in person.

I would drop an extra $50 to see this in person.

For people to outrightly state they would spend more money at a Disney Resort is a shock itself, especially after the numerous callouts over the brand’s increasing prices.

The performance by Disneyland Resort’s Ernesto de la Cruz is only one of many, and if you were lucky enough to swipe tickets to the event, you’ll definitely be the envy of many this Halloween season.

The details for the Oogie Boogie Bash Halloween Party event are as follows:

What do you think of this cool new Halloween experience? Are you going to the Oogie Boogie Bash to see Ernesto de la Cruz live? Share in the comments below!