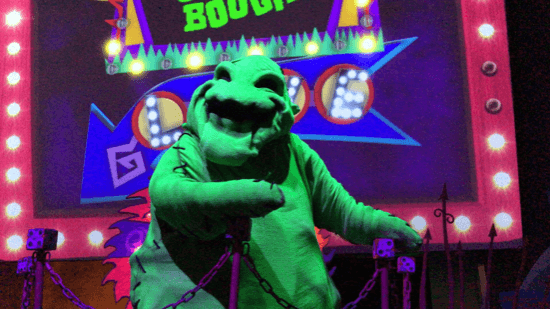 Disneyland Resort (@Disneyland) just made an exciting announcement on the Park’s Twitter account, as they teased the arrival of two new villains who will be joining this year’s Immersive Treat Trails at Oogie Boogie Bash – A Disney Halloween Party, leaving fans to wonder who these characters may be.

Let the frightfully fun guessing begin! Can you guess which two villains are joining this year’s Immersive Treat Trails at #OogieBoogieBash – A Disney Halloween Party?
For more information about this separately ticketed event, visit http://di.sn/6009zYsVf

Let the frightfully fun guessing begin! Can you guess which two villains are joining this year’s Immersive Treat Trails at #OogieBoogieBash – A Disney Halloween Party?
For more information about this separately ticketed event, visit https://t.co/iEwOE0eTKp pic.twitter.com/pasRsY59QL

Disney fans have already speculated about who these new characters might be, with the Sanderson Sisters, from the Hocus Pocus movie franchise, as one of the most popular ones among Guests. This would make sense, as the highly anticipated sequel, Hocus Pocus 2, is coming to Disney+ on September 30, just in time to kick off the Halloween season.

Another prevalent character among Guests speculating is Mother Gothel from Disney’s Tangled (2010). Since the video ends with a humming very similar to “Mother Knows Best,” Gothel’s song in the movie, and footage of candles being put out, which also resemble the footage from this song in Tangled, it is possible that one of the new characters joining the party at this year’s Oogie Boogie Bash will be Mother Gothel.

Since we can also see a flower rotting in the video, many started guessing that Gaston would be arriving at the party, as the decaying flower is an iconic part of Beauty and the Beast (1991). However, some fans started pointing out that the flower is inside a teapot, and the scene in this video is very similar to Madam Mim’s musical number in The Sword in the Stone (1963), which could point out to Madam Mim rather than Gaston coming to Disney California Adventure this Halloween season.

Other characters that popped up in the discussion were Jafar from Aladdin (1992), Wanda in her Scarlet Witch costume from Doctor Strange in the Multiverse of Madness (2022), and Hades from Hercules (1997). While it would be exciting to see all these characters at this year’s Oogie Boogie Bash at Disney California Adventure, these are all still speculations, as Disney is yet to make the official announcement, probably in the coming weeks.

Oogie Boogie Bash will take place on select nights in September and October this year, and tickets for this exclusive event will be released to the general public on June 30 and start at $129 per Guest, varying on the date Guests plan to visit the Park.

Which villain do you think will come to the Oogie Boogie Bash this year? Let us know in the comments below!