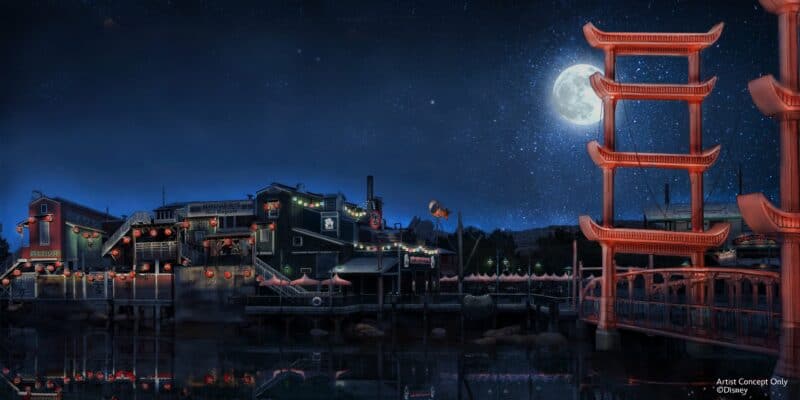 While some of these announcements had been highly anticipated, like more information on the retheming of Splash Mountain to transform it into Tiana’s Bayou Adventure and a 16-feet-tall statue of Te Fiti Coming to EPCOT as part of the all-new Moana-inspired attraction, some have taken attendees entirely by surprise.

A great example of these shocking announcements was made by Walt Disney Parks and Resorts Chairman Josh D’Amaro when talking about Disneyland Resort, and it made the whole crowd lose their minds.

Josh shared the initial concept art for a breathtaking interpretation of San Fransokyo, the futuristic city in which Big Hero 6 (2014) takes place.

This all-new breathtaking land will replace Pacific Wharf in Disney California Adventure and bring new life to the area. Josh D’Amaro commented that this project is still in its early development phases and didn’t mention an official timeline for the titanic project. However, the excitement to finally be able to meet Baymax at Disney California Adventure will surely make the wait worth it!

Disney Parks (@DisneyParks) shared the early concept art you can see below, with some details on the upcoming retheming.

FIRST LOOK! Pacific Wharf at Disney California Adventure Park will be reimagined as San Fransokyo from the Walt Disney Animation Studios film “Big Hero 6,” and feature a place to meet Baymax as well as new spots to eat and shop. #D23Expo

FIRST LOOK! Pacific Wharf at Disney California Adventure Park will be reimagined as San Fransokyo from the Walt Disney Animation Studios film “Big Hero 6,” and feature a place to meet Baymax as well as new spots to eat and shop. #D23Expo pic.twitter.com/0EcVGXxGu2

Pacific Wharf in Disney California Adventure park, which evokes San Francisco’s waterfront, will be reimagined into San Fransokyo from “Big Hero 6,” where East meets West, and technology meets tradition. Imagineers are in the early phases of this work, but you can see glimpses of what’s to come for children of all ages – the young and young at heart. There will be a place to meet Baymax, plus new spots to eat and shop!

Seeing San Fransokyo come to life for the Disney Parks and hearing the exciting and fun offerings that the project will bring into the Park sure is exciting, and we can’t wait to listen to the latest updates and eventually visit San Fransokyo ourselves to enjoy every bit of technology — and Disney magic — this retheming will bring.

Inside the Magic will update you as more information is released regarding this breathtaking project!

Are you excited to visit San Fransokyo at Disney California Adventure soon? Let us know in the comments below!