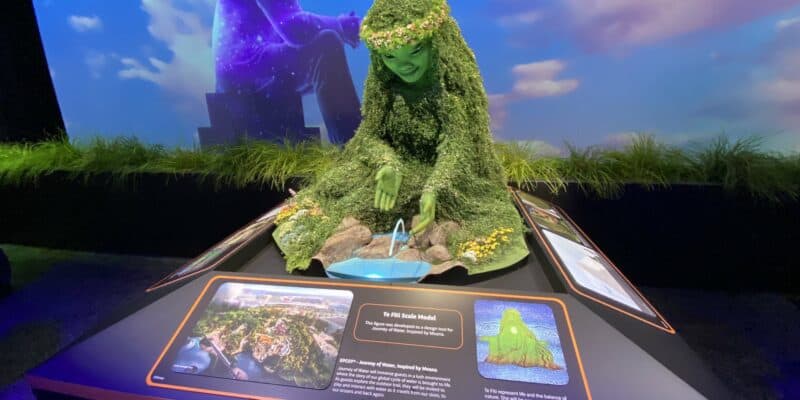 Disney just revealed the first look at a stunning addition coming to EPCOT along with the new ‘Moana’-inspired attraction.

Fans eagerly await to enjoy all the improvements and new experiences coming to Disney Parks worldwide. One of the most anticipated attractions is The Journey of Water, an immersive attraction inspired by Moana (2016) that will let Guests interact with magical, living water in a beautiful and inspiring setting.

This all-new attraction was announced in 2019 and would be the first attraction themed after Disney’s film Moana. The attraction is currently developing at EPCOT and is already showing significant progress. However, a breathtaking detail was just revealed as part of the coming D23 Expo announcements.

During a special media preview of the upcoming D23 Expo, Ashley Carter (@AshleyLCarter1) shared a few images of a breathtaking detail that will accompany this new attraction, a massive, 16-feet-tall Te Fiti model.

The Journey of Water Inspired by Moana attraction coming to EPCOT will feature a 16 foot tall Te Feti. #D23Expo

The Journey of Water Inspired by Moana attraction coming to EPCOT will feature a 16 foot tall Te Feti. #D23Expo pic.twitter.com/AkwmxXzMjX

The scale model shows the incredible attention to detail that will go into realizing this attraction and talks about the different teams involved in creating this fantastic new addition, including Disney Imagineering and Walt Disney Animation Studios teams. The process of bringing this massive Te Fiti to life involved the exploration of the character’s pose, the color design of her figure, clay model conceptualization, sketching, and photo reference to study ways to represent Te Fiti protecting the water during its journey.

Per Disney’s information on this scale model:

Te Fiti represent life and the balance of nature. She will be seen protecting water as it voyages around the water cycle.

During this D23 Expo, Disney describes the Moana-inspired attraction as follows:

EPCOT-Journey of Water, Inspired by Moana

Journey of Water will immerse guests in a lush environment where the story of our global cycle of water is brought to life. As gusts explore the outdoor trail, they will be invited to play and interact with water as it travels from our skies, to our oceans and back again.

Are you excited to experience The Journey of Water at EPCOT when it opens? Let us know in the comments below!