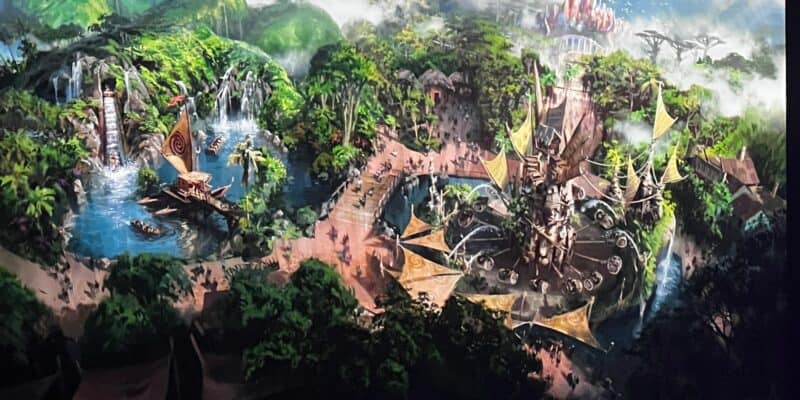 Today, at Disney’s 2022 D23 expo, it was teased by Josh D’Amaro, Chairperson of Walt Disney Parks and Resorts, that DinoLand, U.S.A., could be completely reworked in an upcoming project.

Nothing was confirmed, nor were there any dates or specific themes given, but concept art was revealed from the “blue sky” idea. “Blue sky”  is basically a design process that allows Disney Imagineers to think outside the box and not worry about budgets, not yet at least.

Below is the concept art for a potential DinoLand U.S.A. overhaul:

It is worth noting that, at this time, Disney World officials have not confirmed what will replace the Primeval Whirl Wild Mouse-style ride or if Dinoland, U.S.A. will be rethemed at any point in the near future. For now, Guests can continue to visit the area where carnival games, the Restaurantosaurs quick service location, and the Triceratops Spin ride are all available.

DinoLand, U.S.A. features what is possibly Disney World’s scariest attraction with DINOSAUR, a time-traveling adventure. DINOSAUR opened alongside the Animal Kingdom Park in April of 1998, although it had a different name and offered a slightly different experience. DINOSAUR is an intense, exciting, and downright prehistoric trip through time, letting Guests witness the moments just before the dinosaurs were wiped out of existence due to an asteroid impact. As its slogan states, “It’s fast, it’s a blast, It’s in the past!”.