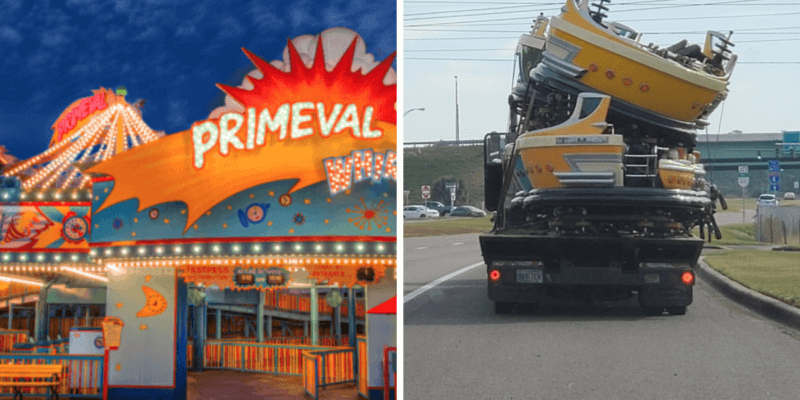 Disney has been slowly but surely removing the Primeval Whirl attraction from Disney’s Animal Kingdom Park.

This tiny coaster that sits at the back of Disney’s Animal Kingdom is one of those, “love it or hate it” attractions. We reported that the coaster cars had been removed from the track back in July. Now they have reappeared, but not in the attraction.

Disney fan @Cheeksadam spotted the rollercoaster cars loaded in the back of a truck, bring hauled down the road to an unknown location:

Disney did confirm that this attraction would be permanently closed; however, they have not announced an attraction in its place.

That leaves a very big hole in the Chester and Hester section of Disney’s Animal Kingdom. Keep an eye out at auctions in the Florida area; it’s not guaranteed, but we sometimes see old attraction parts sold off!

It is sad to see Primeval Whirl come to an end, but I personally cannot wait to see what Disney comes up with next to surprise and delight us! There is currently so much construction happening around Walt Disney World, and Magic Kingdom and EPCOT are both set to get thrilling rollercoasters added to their lineup!

At Magic Kingdom, you will soon be able to ride the TRON Lightcycle Power Run attraction that previously debuted at Shanghai Disneyland.

Perhaps Animal Kingdom will get a new family-style coaster now that Primeval Whirl is gone. But again, Disney has yet to make any announcement on a replacement for the attraction.

What is your favorite Disney rollercoaster? Let us know in the comments below!

We can help you plan the perfect Walt Disney World vacation, click here for more information!