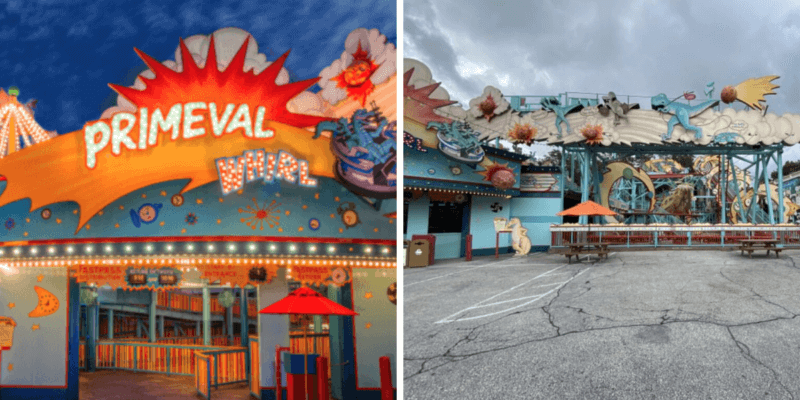 According to @ScottGustin, the ride vehicles have been officially removed from the track, located in the Dinoland, U.S.A. area of the theme park.

This news comes shortly after Walt Disney World officially announced that it would permanently close the attraction along with Animal Kingdom’s nighttime spectacular, Rivers of Light.

Primeval Whirl was a spinning, family-friendly roller coaster attraction that provided the adventure of being sent back in time one would find in the popular dark ride, Dinosaur, without all of the terror of Dinosaur. The spinning was a whimsical way to represent going back in time.

The attraction’s web page has now been removed from the Walt Disney World website, but the official description read:

Glide through a fossilized jigsaw puzzle of dinosaur, before leaving the past behind—just in time!

While the attraction saw initial popularity, it has been closed periodically for over the past year.  There is still no word what the Walt Disney Imagineers plan to put in its place.

Scott’s other picture gives us a broader look of Dinoland, U.S.A. It shows the themed-land bleak and almost abandoned with the shops, restaurants, and gaming areas closed or just empty. The dark cloud coverage also adds to that bleakness.

When you are planning your trip to Disney World, it is important to be aware of closures like this, especially if it is a ride you were expecting to ride. That is why we continue to recommend our friends at Academy Travel. Academy’s agents keep you informed so you are aware of the latest updates and are left with proper expectations that allow you to have the most magical trip possible. Click here to learn more and book your next trip.

Are you sad to see Primeval Whirl go? What do you hope replaces it? Let us know in the comments!