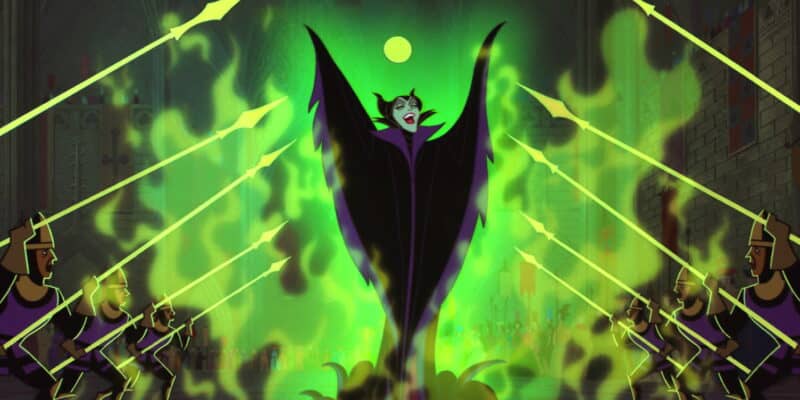 Something wicked this way comes!
The Walt Disney Company has always been a champion of imagination, and loves bringing everyone’s favorite Disney films, animations, and ideas to life.
Now, they’re considering bringing something that Disney fans and Park Guests have been asking for, for ages — an entirely Villain-themed land!

The Villains in the Disney Parks have always been a huge draw — with Guests loving to interact with Villainous face characters like Gaston from Beauty and the Beast (1991), Maleficent from Sleeping Beauty (1959), and Cruella De Vil from One Hundred and One Dalmatians / 101 Dalmations (1961).

Unfortunately, until now, Guests have only been able to meet and interact with these coveted Villains either at Halloween Events (like this mind-blowingly realistic Ernesto de la Cruz Meet N’ Greet at this year’s Oogie Boogie Bash) or around at their “heroes” or “good counterparts'” lands and areas within the Disney theme parks.

Now, The Walt Disney Company and Disney Imagineering are asking the question: would you want to meet these Disney Villains in a nefarious world of their own?

At this year’s D23 Expo held in California, Disney Parks Head Josh D’Amaro took to the stage to share several brand-new concepts that the Imagineering team are looking to put into action. D’Amaro brought out Chris Beatty and Jennifer Lee, and the Disney team opened up about what they’ve been cooking behind the scenes — and gave the crowd a sneak peek at a Villains land concept that they’ve been playing with.

After discussing the potential of a Coco and Encanto land that might be entwined together somehow over at Walt Disney World’s Magic Kingdom, the gathered Disney team began talking about one of the strongest, most iconic and also beloved portions of the Disney canon — the Disney Villains — in all their maniacally evil glory!

This proposed “Villains Land” would be placed right behind Big Thunder Mountain at Walt Disney World’s Magic Kingdom over in Orlando, Florida, tucked alongside or behind the bright, colorful world of Coco and Encanto.

They then shared this new concept art of a new Villains Land, and proposed the concept of:

Villains looming over Casita Madrigal, and what could be beyond Big Thunder Mountain.

This announcement was met with thunderous applause and much shouting from the assembled Disney Parks fans!

Do you see Villains Land lingering behind the fog and clouds behind the Coco area and Encanto‘s Casita?

All of this would undoubtedly fill a missing void in the Disney Parks for an enhanced Villain experience — and is something that fans have been dying to see for years. The new concept images definitely look cool, and we’re excited to see where this delectably evil new Land over at the Walt Disney World’s Magic Kingdom might have in store for Disney Park Guests — if and when it gets made!

Are you excited to see this Villains Land concept come to life? Share your thoughts in the comments below!