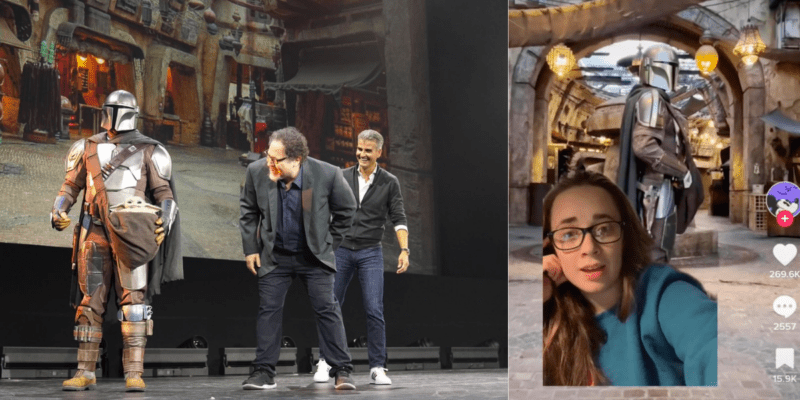 At D23 Expo last weekend, Disney Parks and Resorts Chairman Josh D’Amaro joined Jon Favreau, writer and director of The Mandalorian on Disney+, to announce that Mando and Grogu will arrive at Disneyland Resort in mid-November.

Disney previously teased the pair’s arrival after introducing the legendary bounty hunter Boba Fett and mercenary Fennec Shand to Disneyland Park earlier this year in a move many fans felt tarnished Planet Batuu’s timeline. (There are no plans to bring any of the Star Wars characters to Walt Disney World Resort.)

However, one Disney Parks fan says something more than the Batuu timeline is at stake. In a TikTok, @galacticcowpoke expressed concern that Din Djarin and the child, popularly known as “Baby Yoda,” would face harassment from Guests in Star Wars: Galaxy’s Edge:

“I give this six months, and that’s being nice about it,” she said. “These poor people are not being paid enough for this sh*t, are they? They’re just not.”

“I know that you know that this is just an underpaid Theme Park employee,” she explained. “So I’m going to need you to not sexually harass these people while they’re at work.”

Hundreds of commenters agreed, saying they believe harassment concerns are behind the decision to keep Marvel’s Bucky Barnes and other conventionally attractive characters out of the Disney Parks.

“Litterally the reason they took so long to put loki in the theme park, and bucky still isn’t there,” @ennakin_skywalker wrote.

Many referenced other characters that regularly experience harassment.

Commenters also agreed that the highly anticipated Star Wars meet-and-greet isn’t likely to last long. “I give it a week before he becomes a balcony meet and greet,” @theonlyvelocipastor said.

It’s important to be respectful to Disney Cast Members, no matter your opinions on the characters they portray. @littleartistan said it best:

“It’s one thing to make a JOKE about flirting with Mando TO YOUR FRIENDS. It’s another to say something to a cast member who can’t tell you no.”

Are you excited for the Mandalorian and Grogu to arrive at Star Wars: Galaxy’s Edge at Disneyland Resort?