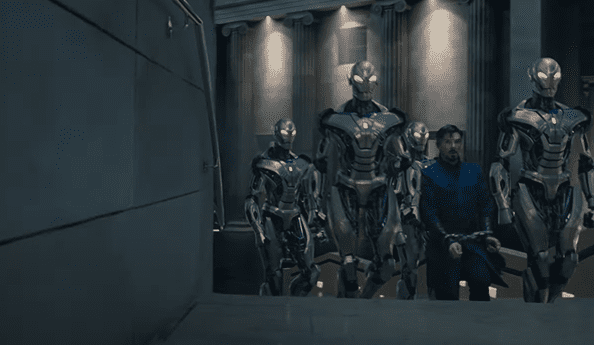 The Illuminati may have a bigger role in the MCU if Richie Palmer has her way.

Fans began talking about the secret society group, Illuminati after reports of a new project with the superhero team was being considered at Marvel Studios. Now, fans are discussing how big of a role the Illuminati will play in Doctor Strange in the Multiverse of Madness (2022) as Chiwetel Ejiofor’s Mordo seems to be involved with the superhero group.

In the Doctor Strange trailer, fans saw Strange being escorted by Ultron-like robots to a council chamber where they heard Patrick Stewart’s voice. Fans now believe that Stewart will be reprising his role as Charles Xavier/Professor X as there have been reports that the X-Men will have a cameo in the movie. Stewart’s role as Xavier makes sense as he was one of the prominent members of the Illuminati.

Related: Marvel May End Up Delaying ‘Love and Thunder’ For Reshoots

Co-producer, Richie Palmer was asked in a recent interview by Empire Magazine if she would comment on the rumors about the Illuminati in Doctor Strange 2. She confessed that she loved the superhero group, but they would be more “MCU driven” if they were to show up in the Marvel Cinematic Universe:

“I will say that I love the Illuminati. But if we ever introduce the Illuminati in the future, it might be more MCU-driven and have some more ties to our characters in the MCU, versus just replicating what’s in the comics.”

This makes sense as the original Illuminati group is Namor, Reed Richards, Charles Xavier, Iron Man, Black Bolt, and Doctor Strange. Marvel doesn’t always follow the comics closely as the MCU is very different from the comics so it would make sense for the roster to be different.

In the comics, the Illuminati is comprised of superhero from the Avengers, Fantastic Four, and X-Men. The group was created by Tony Stark as a way to make sure there was a group ready to face problems that the Avengers couldn’t handle. It would make sense that the MCU’s Illuminati would have more familiar faces in the roster instead of following the original lineup of superheroes.

Paul Bettany’s White Vision could end up being a part of the Illuminati due to his intellect and that would allow the android to remain out of the public eye. This would also explain what the character has been up to after regaining his memories at the end of WandaVision.

Palmer may also be trying to hide the fact that all of the original members of the Illuminati are reported to have an appearance in the MCU later this year. Tom Cruise is reported to be playing a variant of Tony Stark/Iron Man in the Doctor Strange sequel.

Some fans believe that Cruise will be playing Superior Iron Man who was an evil version of Tony Stark from the comics. Namor is rumored to make an appearance in Black Panther: Wakanda Forever (2022) as the film is reported to have Atlantis in the film.

Reed Richards is reported to make his debut in Doctor Strange 2 and the Fantastic Four are confirmed to be joining the MCU soon anyways. Black Bolt probably won’t make it into the MCU as Marvel has avoided the Inhumans since the Marvel series wasn’t well-received by Marvel fans.

It’s very possible that the Illuminati will make an appearance in Doctor Strange 2 and then get their own MCU series or movie as the superhero team would be very interesting to see more of in the MCU. The Avengers was great at stopping threats from destroying the world, but now the Marvel Universe has expanded into other universes so it would make sense for Marvel to find other teams more equipped with saving the Multiverse than the original superheroes who saved the world.

Do you want to see the Illuminati in the MCU? Do you think Tom Cruise’s Iron Man will show up in more MCU movies? Let us know what you think in the comments section below!