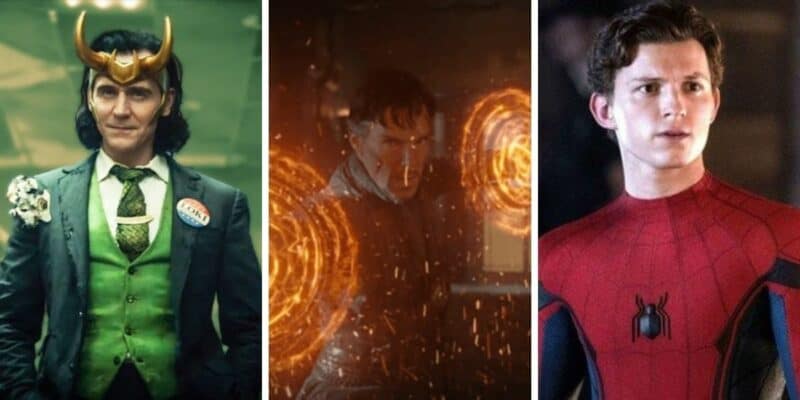 Spider-Man: No Way Home (2021) made its debut this weekend in cinemas, and it seems to be the most eagerly-awaited MCU movie yet.

Starring Tom Holland as Peter Parker/Spider-Man and Benedict Cumberbatch as Doctor Stephen Strange, the Marvel Cinematic Universe and Sony movie has broken cinema records and lived up to its incredible hype.

Now, an exciting report has revealed that Kevin Feige’s upcoming Doctor Strange In the Multiverse of Madness (2022) is reshooting to include even MORE Multiversal interactions and big cameos.

Making over $50 million in ticket sales from Thursday previews alone, the Sony and Marvel Studios film hit a pandemic-era best AND is the third-highest in cinematic history behind Avengers: Endgame (2019)  at $60 million and Stars Wars: The Force Awakens (2015) at $57 million.

Deadline noted that the Jon Watts-directed film was “eyeing [a] $200M+ opening” and that it “hopes to land among [the] top 7 domestic debuts of all-time.”

With the appearance of characters like Willem Dafoe’s Green Goblin and Alfred Molina’s Doctor Octopus from Sam Raimi’s Spider-Man and Marc Webb’s The Amazing Spider-Man franchises in the trailer, fans believed that Peter Parker actors Tobey Maguire and Andrew Garfield would be appearing alongside Tom Holland in No Way Home.

After the critic and box-office success of Spider-Man: No Way Home, the MCU is now apparently using the reshoots of Doctor Strange In the Multiverse of Madness to add more characters and cameos into Cumberbatch’s next solo outing at Marvel Studios.

We recently reported how Benedict Cumberbatch and Marvel Studios were undertaking six weeks of reshooting, working six days a week for Doctor Strange In the Multiverse of Madness

According to The Hollywood Reporter’s Heat Vision newsletter, reshoots for Doctor Strange in the Multiverse of Madness wrapped this week, the same week when Spider-Man: No Way Home was released in theaters:

“And we’ve also learned that part of the reshoots may have been spurred by the new Spider-Man movie and the Disney+ Loki series, both of which deal with the multiverse.”

According to reports, Marvel boss Kevin Feige is pushing the limit even further on Multiversal interactions between Marvel characters from different universes and timelines. This is leading to more reshoots to bring “more cameos and character introductions” and ultimately “more fun” Multiverse elements into the Benedict Cumberbatch-starring sequel.

It was recently rumored that Hugh Jackman could potentially be one of the actors making a cameo in the MCU movie. Jackman portrayed Wolverine in 20th Century Studios’ X-Men franchise, and it looks like he may finally be entering Feige’s Marvel Cinematic Universe, now that The Walt Disney Company owns both 20th Century Studios and Marvel Studios.

We’ve seen the introduction of Jonathan Majors’ He Who Remains/Kang the Conqueror in Loki on Disney+, as well as five villains from three Spider-Man franchises appear in No Way Home.

It’s still a mystery as to who will feature in Doctor Strange 2, but with all of these extensive reshoots and additional photography, we can only assume it’s going to be big. Could we finally be seeing X-Men, Daredevil, or Ryan Reynolds’ Deadpool enter Disney’s Marvel Universe? In the Marvel comics, Doctor Strange (Benedict Cumberbatch) plays a significant role in connecting the Avengers to Professor Xavier, Wolverine, Cyclops, Gene Gray, and more.

Doctor Strange In the Multiverse of Madness was among the 2022 Marvel movies that were recently pushed back to later in the year — its release date has been delayed from March 25, 2022, to May 6, 2022. The movie is directed by Spider-Man (2002)’s Sam Raimi.

Who do you think will be featured in Doctor Strange In the Multiverse of Madness?