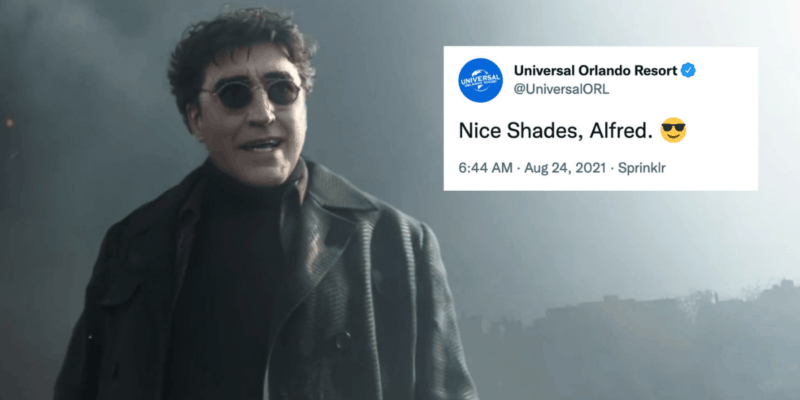 The entire world is talking about Spider-Man: No Way Home, the highly anticipated Marvel movie featuring Tom Holland’s Peter Parker as he traverses through Marvel’s New York against new villains. In the official trailer, Alfred Molina’s Doctor Octopus broke the internet, and even Universal can’t hold in their excitement on Twitter.

Related: Understanding the 5 Villains Teased in ‘Spider-Man: No Way Home’

The official teaser trailer for No Way Home broke 24-hour viewership records and is still trending on Twitter. Reportedly gaining a collective 355.5 million views, No Way Home is the most anticipated movie in the Marvel Cinematic Universe since Avengers: Endgame (2019).

Every Marvel fan is ready to see the Sinister Six from Marvel Comics make their live-action Marvel Universe debut in No Way Home and take on the web-slinging Avenger, even Universal Studios.

The three-word Tweet is rather cryptic, and every Universal fan probably didn’t catch the joke right away.

However, Marvel fans were quick to hilariously fire back at Universal.

One fan shared a quote from Universal Orlando’s The Amazing Adventures of Spider-Man attraction in Islands of Adventure, sharing:

Doc, your aim’s worse than your haircut!

Doc, your aim's worse than your haircut!

Doctor Octopus shares the 3D screen with Spider-Man at Marvel Super Hero Island’s The Amazing Adventures of Spider-Man. Parker delivers hilarious quips to the Marvel Comics supervillain throughout the attraction, making his interactions with Doc Ock unforgettable for every Universal and Marvel fan.

In the end, Universal Orlando Resort’s Twitter was seemingly referring to Doc Ock’s new shades in the No Way Home trailer.

Without the help of Earth’s Mightiest Heroes, like Captain America, Black Panther Iron Man, or even Captain Marvel, Peter turns to Doctor Strange (Benedict Cumberbatch). Spider-Man and Doctor Strange accidentally open a rift in the Multiverse when a spell goes wrong in the Sanctum Sanctorum, unleashing a deadly batch of supervillains, like Alfred Molina’s Doctor Octopus from previous Spider-Man franchises.

The Marvel collection is growing with each new superhero film and series on Disney+. Marvel films are expanding after the events of Loki and Marvel characters are being introduced to variants of each character.

Which villain are you most excited to see in No Way Home? Let us know in the comments below!