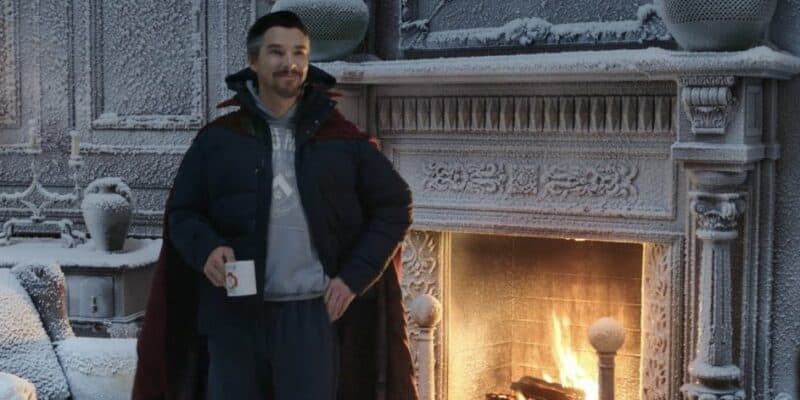 Now that the Spider-Man: No Way Home trailer is officially out, fans have been inspecting it to gather all of the confirmed details and clues that may come from it.

Not only do we expect to see Tobey Maguire and Andrew Garfield in the film, but villains like Alfred Molina, Jaime Foxx, and the newly confirmed Willem DeFoe will be reprising their roles of villains, Doctor Octopus, Green Goblin, and Electro. There was another detail that some fans have already begun to point out, but it is a lot more comical and may have absolutely no meaning at all!

Doctor Strange (Benedict Cumberbatch) will, of course, star in the film as he and Peter Parker/Spider-Man (Tom Holland) enter a new reality through the now-disrupted Multiverse. When Parker goes to visit Strange, we not only see that Strange is hilariously in a winter coat surrounded by snow in his home, but if we take a look at his coffee mug, it seems that Marvel was able to sneak in an NSFW phrase.

If we take a look at the mug, it reads, “Oh for [fox] sake,” but instead of saying fox, it is an actual photo of the fox. The mug may just be a joke that director Jon Watts had a chuckle with, or perhaps it could mean more? During a conversation, we laughed at the possibility that the fox is representative of 20th Century Fox, in which Disney acquired and remanded 20th Century Studios. We took it even one step further and speculated that perhaps this connection means we will see the Fantastic Four and X-Men appear in the film. Of course, we knew it was a reach, but there is always a possibility when it comes to the MCU!

Personally, I like to think that the mug represents how future Doctor Strange will feel once he realized he severely disrupted the Multiverse.  Realistically, the mug was probably just a comedic prop.

If you are a fan of the mug, you can actually purchase it on Amazon for $9.99. Click here to own a piece of the Marvel Cinematic Universe for the price of a McDonald’s combo today!

Do you think this mug has any extra meaning to it? Let us know in the comments below!

Comments Off on Marvel Sneaks NSFW Joke Into ‘Spider-Man: No Way’ Home Trailer