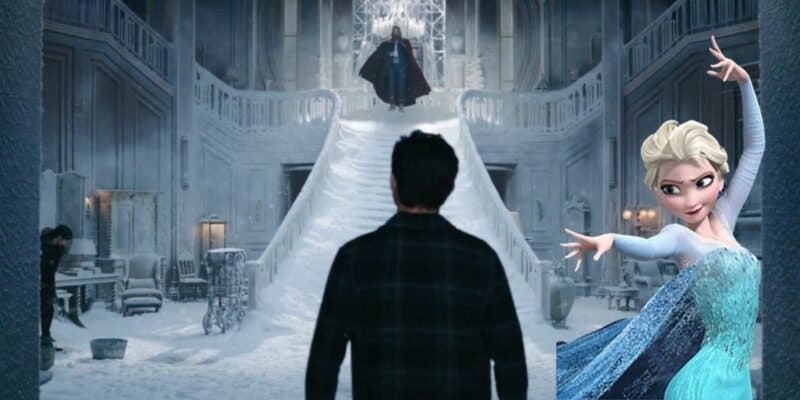 Yesterday, Spider-Man: No Way Home dropped the first trailer for the film, and fans have not been able to contain themselves on social media, as the film has been highly anticipated by many.

In the trailer, we see Peter Parker (Tom Holland) visit Doctor Strange and ask to have his identity as Spider-Man be hidden once again from society. When he visits Doctor Strange (Benedict Cumberbatch), we can see that Strange is surrounded by snow. After some viewers saw the conditions of Strange’s residence, it seems that they thought the film looked like a very different Disney movie.

If we are honest, it does look a little like Elsa paid a visit to Doctor Strange and gave the Master of Mystic Arts his own ice palace. Now, we just need a little talking snowman to be his sidekick…

Josh Gad, who played Olaf in both Frozen and Frozen 2, saw the Tweet and fully endorsed the Marvel x Frozen Multiverse.

The crossover event of the year

The crossover event of the year https://t.co/71LzI9KlXn

Considering how easy Strange agrees to Parker’s request, which would cause chaos, it seems that he did truly “Let it Go”.

No Way Home is the first film, following the Disney+ series, WandaVision, and Loki, to dive into the Multiverse in Phase Four of the Marvel Cinematic Universe. The two will have to deal with the consequences of their actions, which will cause a new reality.

We can also expect to see Tobey Maguire and Andrew Garfield in the film, as well as villains like Alfred Molina, Willem DeFoe, Jaime Foxx reprising their roles of villains, Doctor Octopus, Green Goblin, and Electro. Of course, this is not Holland’s debut in the MCU, as he previously appeared in Captain America: Civil War (2016), Spider-Man: Homecoming (2017), Avengers: Infinity War (2018), Avengers: Endgame (2019), and Spider-Man: Far From Home (2019).

We do not ever expect to see Anna or Elsa in the MCU, but the similarity in the trailer was funny to point out!

What did you think of the Spider-Man: No Way Home trailer? Let us know in the comments below.