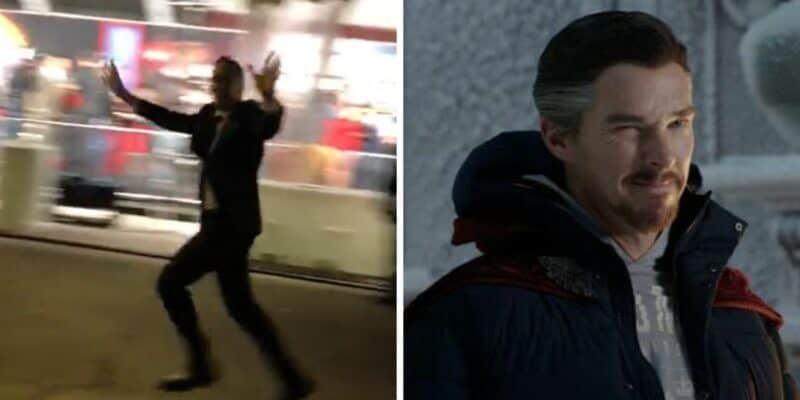 It’s the week every Marvel fan has been waiting for!

Kevin Feige’s next MCU movie is THE hot cinema ticket this festive season, with Spider-Man: No Way Home (2021) crashing most major cinema sites when tickets were dropped this month.

And now Benedict Cumberbatch’s action-movie star status has apparently gone to his head, with a video showing him running from security at the premiere on Monday.

With rumors circling about the appearances of Tobey Maguire and Andrew Garfield in Spider-Man: No Way Home, many Marvel fans are wondering how much each member of the cast knows – especially with Holland’s reputation of spoiling movies in interviews.

When it comes to Doctor Stephen Strange, Benedict Cumberbatch recently revealed how stepped back he is from Marvel’s casting department, explaining his surprise at Harry Style’s appearance in Marvel’s Eternals (2021). Now, Cumberbatch is the one providing the surprises with his shenanigans at the Spider-Man: No Way Home premiere.

At the premiere for the eagerly-awaited Spider-Man: No Way Home in Los Angeles on Monday, stars Tom Holland, Zendaya, Jamie Foxx, Willem Dafoe, and Jon Favreau made their appearance on the red carpet, revealing no secrets along the way.

Held at the Regency Bruin Theatre, Zendaya was seen wearing an amazing spiderweb-printed dress with a lace mask, while Holland stepped out in a suave brown suit.

And Benedict Cumberbatch? Well, he just ran away with the show – literally.

Marvel fan bri posted on Twitter a hilarious video filmed at the No Way Home premiere, featuring our favorite British actor quite literally running away from his own security:

BENEDICT RUNNING FROM HIS SECURITY LMFAO

To the sound of screams and whoops, Cumberbatch can be seen wildly running alongside the fans waiting at the premiere, being chased by security the whole time.

We always knew we were fans of Sherlock star Benedict Cumberbatch, but what a treat to see this goofy behavior from one of Hollywood’s biggest stars.

Benedict Cumberbatch has two big MCU movies coming up. In December, the eagerly-awaited Spider-Man: No Way Home, and next year, Doctor Strange in the Multiverse of Madness (2022).

He can currently be seen in the Netflix Western drama The Power of the Dog (2021), in which Cumberbatch portrays gruff cowboy Phil Burbank, who lives near his brother George (Jesse Plemmons). The plot of the project centers around Burbank, whose relationship with his sister-in-law Rose Gordon (Kirsten Dunst) is strained.

That’s a wrap on the #SpiderManNoWayHome red carpet premiere! 🎬

What do you think of Benedict Cumberbatch’s shenanigans at the No Way Home premiere?