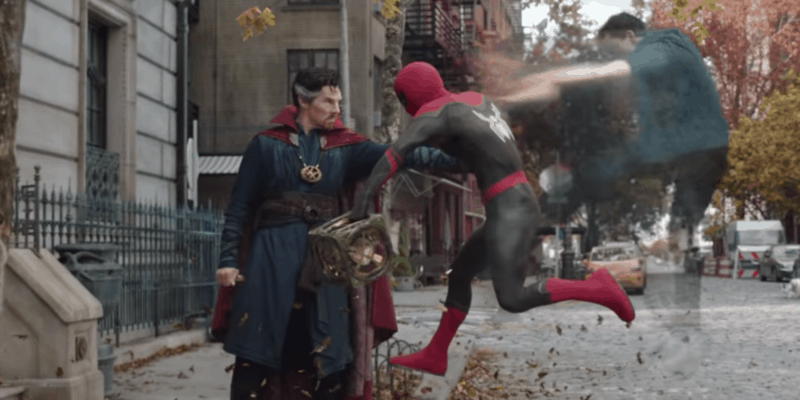 Jon Watts returns this year with the third solo outing for the famous Marvel web-slinger following his triumphant Spider-Man: Homecoming (2017) and Spider-Man: Far From Home (2019). With rumors swirling and the world waiting patiently for its release, here is everything we know about the cast of Spider-Man: No Way Home (2021).

Who is in the cast of Spider-Man: No Way Home?

Which characters from the MCU are coming back?

In keeping with the trend of the MCU’s Spider-Man movies, No Way Home will feature previous Spider-Man cast members as well as actors from other films in Phase 4 and the greater Marvel Universe. Tom Holland will reprise his role as the titular Avenger, taking on Peter Parker for his third solo outing in the MCU.

Also starring in the next Spidey adventure will be actor Benedict Cumberbatch who plays the fan-favorite character, Doctor Strange alongside Benedict Wong’s, Wong. The new official trailer — which debuted just shortly after the supposedly leaked trailer — for No Way Home confirms Strange will be at least partly involved in the Multiversal events set to take place.

In addition to these returning characters, No Way Home will also introduce Paula Newsome in an undisclosed role, although some fans are suggesting this could be Miles Morales’ mother, Rio Morales.

What actors from Sony’s Spider-Man movies are in No Way Home?

J.K. Simmons will also return as J. Jonah Jameson. Simmons had a starring role as the eccentric Daily Bugle editor-in-chief in Raimi’s Spider-Man trilogy but the actor also made a rather shocking cameo in the post-credits scene of the Marvel movie, Spider-Man: Far From Home. There have been rumors that Peter Parker’s love interests from the Sony Pictures movies, Mary Jane Watson (Kirsten Dunst) and Gwen Stacy (Emma Stone), may also appear in the upcoming movie.

Are the Sinister Six in the upcoming movie?

In Marvel Comics lore, the Sinister Six were formed from Spider-Man’s most notorious adversaries. Created by Stan Lee and Steve Ditko, the original incarnation of the Sinister Six was made up of Doctor Octopus, Vulture, Sandman, Kraven the Hunter, Mysterio, and Electro, with Doc Ock leading the villains. Other versions of the line-up also included other popular villains like the Green Goblin.

What is interesting about the Sinister Six is that across both Sony and Marvel Studios, Spider-Man has already faced the majority of these opponents. With No Way Home opening up the Multiverse Loki unleashed in its season finale, chances are the Sinister Six may appear in some form.

In addition to this, the Sinister Six was teased at the end of Sony’s The Amazing Spider-Man 2 with Andrew Garfield’s Peter Parker facing off against the Rhino (Paul Giamatti) — something Garfield has recently spoken about. Speaking of Garfield, his onscreen foe, The Lizard (Rhys Ifans), has also seemingly been spotted in the new teaser trailer.

Who has been rumored to be in the cast?

Will Tobey Maguire and Andrew Garfield return as Peter Parker?

Now, there’s the question on everyone’s lips. For a long time now, Tobey Maguire and Garfield have been rumored to make an appearance in No Way Home. Propelled by the inclusion of villains from their respective franchises, Marvel fans are desperate to see the three eras of Peter Parkers descending on the MCU together.

Casting rumors abound, Maguire has remained quiet on the matter, while Garfield has repeatedly denied the rumors that he will show up this December. However, even though Maguire hasn’t disclosed any information regarding his involvement, Julius Dell actor, Smoove, has seemingly confirmed his role in No Way Home in a recent interview.

Will Willem Dafoe make an appearance in this new Spider-Man movie?

Willem Dafoe starred as Norman Osborn in Raimi’s Spider-Man movies. Acting as the main antagonist in Spider-Man (2002), Dafoe brought the legendary Marvel Comics villain, Green Goblin, to the big screen. Dafoe has not confirmed his appearance in No Way Home outright but he has teased numerous times that there are certain projects he cannot talk about. There was also that laugh and the iconic pumpkin bomb in the recent trailer.

Is Daredevil appearing in Spider-Man: No Way Home?

Another rumor that has been swirling is that Charlie Cox’s Matt Murdock AKA Daredevil will appear alongside Holland in No Way Home. The actor, who is best known as playing the titular character in Netflix’s hugely popular Daredevil series, was reportedly seen on set and just last month had to drop out of a convention appearance right as the No Way Home reshoots were beginning.

Then when footage finally dropped after much fan demand (and a previously leaked trailer), Marvel fans were positive that a certain set of forearms were Cox’s, and not only that, but the scene looked as though it involved a lawyer, and who’s a lawyer? Matt Murdock. But, Cox has shut down rumors that they aren’t his arms in the trailer. He may have denied this, but he didn’t deny his potential appearance altogether…

What is next for the Spider-Man: No Way Home cast?

Will Tom Holland return as Spider-Man?

Holland has had a long tenure in the MCU. Brought into the MCU in Captain America: Civil War (2016), Holland’s Peter Parker/Spider-Man then appeared in Spider-Man: Homecoming, the sequel Spider-Man: Far From Home, Avengers: Infinity War (2018), and Avengers: Endgame (2019). While Holland is a fan-favorite actor in a popular incarnation of a comics icon, his contract is up after No Way Home, meaning he is unlikely to return as the friendly neighborhood Spider-Man any time soon.

That being said, Holland stated, “If they want me back, I’ll be there in a heartbeat.” If the fan reactions from the past five years are anything to go by, Kevin Feige’s Marvel Cinematic Universe will be missing out if Holland doesn’t return to the franchise in the future. Although in 2019, Variety reported on Sony’s and Marvel Studios’ new deal saying, “as part of the arrangement, Spider-Man will also appear in one future Marvel Studios film.”

Who is appearing in Doctor Strange in the Multiverse of Madness?

At this time no specific Spider-Man actors are slated to appear in the sequel to Scott Derrickson’s Doctor Strange (2016). Despite Cumberbatch’s Sorcerer Supreme appearing in the Spidey threequel, it is unlikely we will see Holland appear in Doctor Strange in the Multiverse of Madness (2022) due to his aforementioned contract ending. However, the magical sequel will see the return of some of the MCU’s past performers including Elizabeth Olsen’s Wanda Maximoff AKA Scarlet Witch, and Rachel McAdams’ Dr. Christine Palmer.

Are any of the Spider-Man cast appearing in any other Phase 4 movies?

There has been a steady trickle from the rumor mill about an appearance of the Fantastic Four in No Way Home, and while this upcoming venture is a long way off, fans have not stopped theorizing when Marvel’s First Family will show up in the MCU. One thing that does tie Spider-Man and Fantastic Four together, at least in the MCU, is that Jon Watts is directing both franchises.

Does Sony decide what characters can appear in the MCU?

Why was Tom Holland not in What If…?

Marvel’s latest animated series, What If…?, has seen a whole host of MCU live-action performers return to voice their animated counterparts like Mark Ruffalo’s Hulk and Sebastian Stan’s Bucky Barnes. However, among those characters re-casted for What If…? is Peter Parker/Spider-Man. Hudson Thames is voicing Spidey in this Multiversal animated event with neither Marvel Studios nor Sony providing any reason behind Holland’s exclusion from the project. Director Bryan Andrews recently commented that schedules were a factor in characters being recast.

Will Tom Holland’s Spider-Man be in Avengers 5?

Holland wants back in with the MCU whenever they need him. Whether Feige will use Spider-Man again in the future of Marvel’s Phase 4, Phase 5, and beyond is up for debate. Marvel Studios did recently reveal a slew of new release dates for unannounced projects, and one of those could be the next Avengers-level team-up that may possibly feature any characters from the MCU.

Are Sony’s other Spider-Man movies in the MCU?

Movies like Venom (2018), the sequel Venom: Let There Be Carnage (2021), and the upcoming Morbius (2022) and Kraven the Hunter (2023) are not set in the Marvel Cinematic Universe with Sony and Marvel Studios only sharing the Spider-Man character for use in both Sony’s films and the MCU. The movie rights deal was brokered in 2015 for Spider-Man to appear in Feige’s Universe, and although agreements deteriorated, the deal was reinstated in 2019 to allow Spider-Man: No Way Home to go ahead. Sony’s arm of the Spider-Man franchise has recently been renamed as Sony’s Spider-Man Universe.

Following Black Widow (2021), Shang-Chi and the Legend of the Ten Rings (2021), and Eternals (2021), all will be revealed when Spider-Man: No Way Home debuts exclusively in movie theaters this December.

Who are you hoping to see in Spider-Man: No Way Home? Let us know in the comments!

Comments Off on Everything We Know About the ‘Spider-Man: No Way Home’ Cast