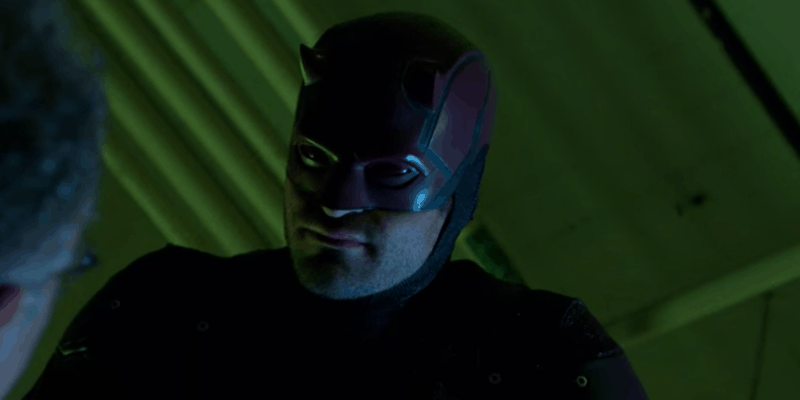 If there is one film that has had the internet collectively screaming for the past few months, it’s Spider-Man: No Way Home.

The third installment in Tom Holland’s Marvel franchise is set to debut this December after months, and months, of fan theories, speculation, and rumors. One of the biggest rumors circulating this year has been the potential appearance of Charlie Cox’s Matt Murdock AKA Daredevil, and the recently released No Way Home trailer seemingly suggested, at least to numerous fans, his character’s arrival in the Marvel Cinematic Universe…or did it?

The Spider-Man: No Way Home (2021) trailer finally debuted last week. Director Jon Watts is back at the helm following his commercial successes with Spider-Man: Homecoming (2017) and Spider-Man: Far From Home (2019). The new entry into Kevin Feige’s Marvel Cinematic Universe welcomes back Holland in the titular role of Peter Parker/Spider-Man, as well as other returning cast members Zendaya (MJ), Jacob Batalon (Ned Leeds), and Marisa Tomei (May Parker).

The record-breaking trailer also confirmed Happy Hogan (Jon Favreau) will be back and gave the first proper look at the Multiversal villain, Doctor Octopus (Alfred Molina) while teasing Electro (Jamie Foxx), and Green Goblin (Willem Dafoe). In fact, No Way Home looks set to bring together an incarnation of Marvel Comics’ Sinister Six.

Despite much fan speculation the trailer for Spider-Man: No Way Home gave no clear idea as to whether previous Peter Parker actors Tobey Maguire (Spider-Man) and/or Andrew Garfield (The Amazing Spider-Man) will return in this latest MCU installment. The Marvel movie looks set to carry on what Loki started — tearing up the Multiverse.

As per the trailer, Doctor Strange’s (Benedict Cumberbatch) involvement in the events of No Way Home looks to cause immense chaos for the future of the MCU, neatly lining up potential events in his own sequel, Doctor Strange in the Multiverse of Madness (2022).

One suspected character’s appearance that had fans reeling was Charlie Cox’s Daredevil. Or to be more specific, Charlie Cox’s suspected forearms. In the trailer, we see Peter at a desk while a character in shirt and black tie — an outfit quite synonymous with Cox’s Matt Murdock in Netflix’s Daredevil — places documents on a table. It’s fleeting, but the outfit paired with the fact that Matt Murdock is a lawyer got some eagle eyed fans incredibly excited.

Except Cox has addressed the fan forearm theories, and it is not good news.

Is Charlie Cox in the Spider-Man: No Way Home trailer?

Speaking to ComicBook, Cox had this to say:

“I can promise you those are not my forearms.”

It is sure to be a blow to fans wanting a confirmation that Cox was appearing in the Spider-Man threequel. Cox has denied the rumors of his Matt Murdock entering the MCU in Spider-Man before but a recent cancellation of an appearance at a convention at the same time as the Spider-Man: No Way Home reshoots ignited fresh rumors that the actor would make his debut in the next Spidey Marvel movie.

Cox first starred as the Marvel character in Netflix’s hugely popular Daredevil series that ran for three seasons and joined other shows to establish The Defenders. Daredevil received critical acclaim and fans have been wanting Cox’s version of the iconic comic book character in the current Marvel Universe for quite some time.

While Cox did shut down the forearm rumors, he could still turn up in the movie. After all, he just said they weren’t his forearms, not that he wasn’t in it at all…

The fan theory and rumor continues. Charlie Cox’s return could be imminent.

Are you hoping to see Daredevil in Spider-Man: No Way Home? Let us know in the comments!