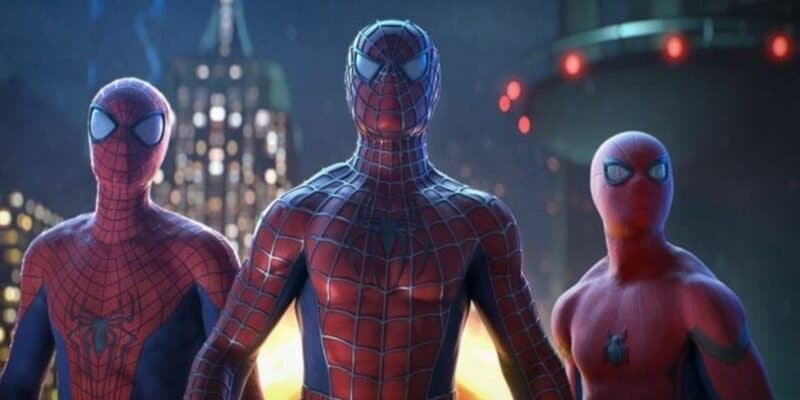 By now, just about every Marvel fan has viewed the official teaser trailer for Spider-Man: No Way Home (2021) — and they’ve quickly spotted what they think is another Spider-Man alongside Tom Holland, seemingly confirming the Spider-Verse.

Fans of the Marvel Cinematic Universe closely dissected every frame of the trailer for No Way Home, and some fans are suggesting that they saw two Spider-Man during the Sandman scene.

Regardless of if these eagle-eyed fans are right, the trailer did showcase the Marvel character Sandman, most likely Thomas Haden Church’s portrayal from the Tobey Maguire Spider-Man franchise.

Watch closely the trailer below and note at 2:27 the suggested scene featuring two Spider-Men:

During that split-second moment, some Marvel fans on Twitter think they spot Tobey Maguire’s Spider-Man, specifically noting the patterns in the particular Spidey costume in the bottom-left section of the frame.

Due to the scene being rather dark with only the light from villain Electro’s (Jaime Foxx) lightning blast striking the screen, it’s somewhat hard to tell exactly what you’re looking at.

However, that suit you saw in the blue circle is most likely Tom Holland’s new black and gold suit. This suit was teased in new merchandise for the film and is supposedly connected to the powers of Doctor Strange (Benedict Cumberbatch).

We briefly see Peter running through F.E.A.S.T. (Aunt May’s homeless shelter) with the suit on, but the webbing in that suit looks incredibly similar to that of Tobey Maguire’s Spider-Man suit.

Nonetheless, some fans think that there’s another Spider-Man figure hidden in the sand right about Tom Holland, suggesting that Tobey Maguire and Andrew Garfield followed their villains into the Marvel Cinematic Universe.

While it’s easy to understand that Tom Holland’s suit looks like that of Tobey Maguire’s black suit in Spider-Man 3, it’s even harder to spot another Avenger in that Sandman scene.

If you look closely in the middle-right section of the frame in the trailer, you can barely spot out the dark silhouette of another flying figure.

It could be a stretch to suggest that there’s another Spider-Man in this scene, but Marvel fans are convinced it’s either Tobey Maguire and Andrew Garfield.

So, it’s completely possible that there’s another Spider-Man in this Sandman/Electro moment, especially when you consider the Green Goblin and Alfred Molina’s Doctor Octopus later showing up.

The Marvel Universe is rapidly expanding with original series on Disney+ and upcoming films Shang-Chi and the Legend of the Ten Rings (2021) and Eternals (2021).

Iconic characters, like Alfred Molina’s Doctor Octopus and Willem Dafoe’s Green Goblin, are going to steal the scene from superhero Peter Parker as Marvel’s New York gets twisted around like never before.

Spider-Man: No Way Home will undoubtedly break 2021 box office records when the super hero movie swings into theaters on December 17, 2021!

Do you think the Spider-Verse is in No Way Home? Let us know in the comments below!