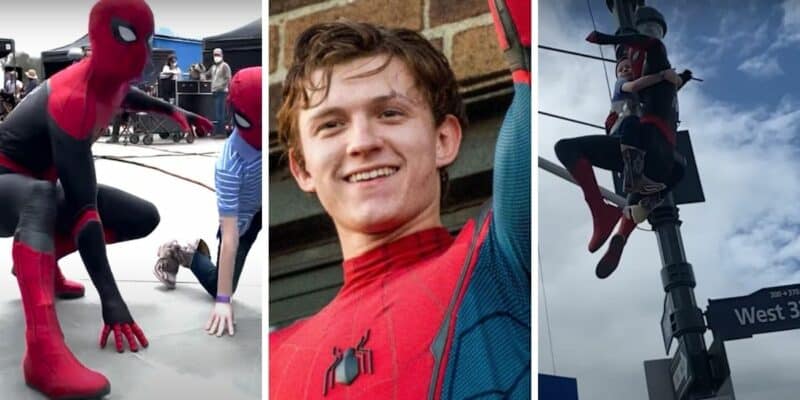 Spider-Man: No Way Home (2021) made its debut today in cinemas, and it seems to be the most eagerly-awaited MCU movie yet.

Making over $50 million in ticket sales from Thursday previews alone, the Sony and Marvel Studios film hit a pandemic-era best AND is the third-highest in cinematic history behind Avengers: Endgame (2019)  at $60 million and Stars Wars: The Force Awakens (2015) at $57 million.

Now, we have some special behind-the-scenes footage of the epic Spider-Man movie, featuring titular star Tom Holland (Peter Parker) at his wholesome best.

Marvel fans haven’t been treated to many behind-the-scenes videos from the set of the new Marvel Cinematic Universe movie Spider-Man: No Way Home.

The official trailer for Jon Watts’ No Way Home broke the internet last month, with the appearance of characters like Willem Dafoe’s Green Goblin and Alfred Molina’s Doctor Octopus from Sam Raimi’s Spider-Man and Marc Webb’s The Amazing Spider-Man franchises in the trailer, leading fans to believe that Peter Parker actors Tobey Maguire and Andrew Garfield will be appearing alongside Tom Holland in No Way Home.

After a lengthy dispute, Sony Pictures and Marvel Studios’ Kevin Feige did not show the two Spider-Man stars in the official trailer for the MCU movie, and cinema-goers are being told to keep spoilers at bay on social media.

The third solo outing for the famous Marvel web-slinger following his successful Spider-Man: Homecoming (2017) and Spider-Man: Far From Home (2019) has been met with very positive reviews. After 220 critics reviews on the movie review site Rotten Tomatoes, Kevin Feige’s Spider-Man: No Way Home is sitting at an overwhelmingly positive 95% “Certified Fresh” and an audience score of 99%.

Now, some newly released behind-the-scenes footage featuring Zendaya and Tom Holland shows a heartwarming experience of a young boy on the set of the Marvel movie.

The videos show Bridger, a boy who saved his little sister from a vicious dog attack back in July 2020. His story made its way around the world, and many thousands have gifted Bridger with amazing experiences. The ‘Bridger Buddies’ Youtube channel is “dedicated to those adventures, and the buddies made along the way”.

In one video, Tom Holland and Zendaya are seen giving Bridger an authentic Spider-Man mask and teaching the young boy how to do the famous Avenger pose:

After gifting Bridger an authentic Spider-Man: No Way Home mask, Tom and Zendaya needed to teach him how to strike the proper Spider-Man pose. Tom and Zendaya are not only amazing actors, but truly incredible people. They treated our children with gentleness and grace. Despite the busy shooting schedule, the attention everyone gave our family was so above and beyond! They made Bridger feel like he was the star. As parents we are so humbled by the kindness.

In a second video, lucky Bridger is seen living out every Marvel fan’s dream of swinging with Peter Parker (Tom Holland) like Spider-Man, holding on to Holland while the actor practiced some web-slinging stunt action on set:

As part of an AMAZING behind-the-scenes tour of the Spider-Man: No Way Home set, Tom asked Bridger if he wanted to practice a movie stunt with him. Of course, who wouldn’t want to live out every kid’s dream of swinging like Spider-Man. We will share more thoughts, videos, and pictures of our trip later, but we just couldn’t wait to share this very special and heart-warming moment. We cannot thank enough Tom and Harry Holland, Zendaya, Marvel and Sony Studios, and all the cast and crew that made this incredible moment happen.

We can’t hide that we’re jealous of the well-deserved behind-the-scenes experience of brave Bridger, and we think every Marvel fan after seeing No Way Home will want to web-swing along with Holland!

Spider-Man: No Way Home will feature Benedict Cumberbatch in his fan-favorite role as Doctor Strange, alongside Zendaya (MJ), Jacob Batalon (Ned Leeds), Marisa Tomei (May Parker), Jamie Foxx (Electro) and Jon Favreau (Harold “Happy Hogan), in a Multiversal series of events. The Multiverse was first seen in the MCU in the Disney+ series Loki starring Tom Hiddleston, and most recently in What If…?.

Have you seen No Way Home already? Would you have liked to have swung with Tom Holland behind the scenes?