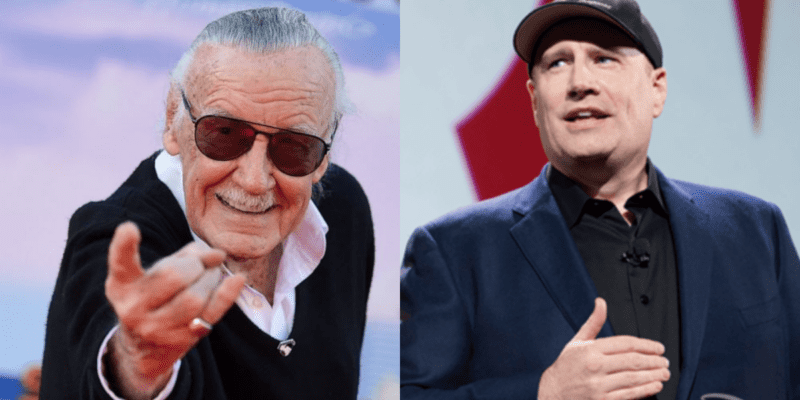 The late Marvel Comics legend Stan Lee has been synonymous with the House of Ideas for half a century — co-creating enduring pop culture phenoms like the Fantastic Four, Spider-Man, X-Men, and the Hulk. Following his prolific work as comic book writer and editor, Lee is just as beloved by fans for his second act as Marvel ambassador and fan-favorite, scene-stealing cameo machine in the Marvel Cinematic Universe.

It wouldn’t be a stretch to say that aside from Stan Lee — along with frequent collaborators and legends in their own rights, Jack Kirby and Steve Ditko — no one has had a bigger impact on Marvel’s cultural footprint than Marvel Studios President, Kevin Feige. Now with reported fourth-wall-breaking involvement in the upcoming Marvel series for Disney+ — She-Hulk starring Tatiana Maslany — Kevin Feige could further cement himself as Marvel’s modern-day Stan Lee.

Marvel’s She-Hulk series is set to hit Disney+ in 2022. So far, most of what fans know about the show comes from the footage shared during Disney+ Day in November. While the full reveal of Tatiana Maslany as She-Hulk  has yet to be revealed, audiences can expect to see Mark Ruffalo reprise his Avengers saga role as Bruce Banner and Smart Hulk.

Speaking to the Straight Outta Gotham podcast, insider Casey Walsh of Geeks Worldwide shared an interesting report — unconfirmed as of this writing — that Marvel Boss Kevin Feige will be directly referenced during the events of the She-Hulk series. Walsh talked about the comedic nature of the show, inspired by the fourth wall breaking in the She-Hulk comics, saying (via The Direct):

“What I’ve heard about that show, it’s like hard comedy, straight comedy, like, meant to be extremely funny. She looks at the camera and talks directly to Kevin Feige in the show, that’s part of her schtick.”

Whether or not Kevin Feige will appear on-camera for a proper cameo remains to be seen. However, if this report is even partially true, it’s noteworthy that She-Hulk will be the first Marvel Cinematic Universe property to break the fourth wall — à la Ryan Reynold’s Deadpool. Perhaps even more noteworthy is Kevin Feige’s very first on-screen in-universe involvement in the MCU.

A Marvel Cinematic Universe Deadpool 3 project is said to be in the works, though it appears to be on hold while Ryan Reynolds takes a breather from acting. According to insider Walsh, She-Hulk will share some comic DNA with former Fox franchise Deadpool, explaining:

“It’s not going to be R-Rated, but yeah [like Deadpool], it’s supposed to be like a super-fast comedy.”

From 2008’s Iron Man until 2019’s Avengers: Endgame, Marvel fans always knew they could count on a cameo appearance from Stan Lee to provide a little fun and levity. Whether he was shooting the liquor of the gods with Thor (Chris Hemsworth) in Avengers: Age of Ultron (2014) or delivering a package to Iron Man (Robert Downey Jr.) in Captain America: Civil War (2016), calling him “Tony Stank,” Stan the Man was always memorable in his on-screen appearances.

Marvel Studios has officially decided to end the tradition of including Stan Lee’s cameos in MCU films following Lee’s death in 2018. The studio has decided not to repurpose old footage of Mr. Lee or digitize his likeness in any future films. The digitally de-aged Stan Lee cameo in Endgame did occur after Lee’s death, but the footage for the scene was captured before his demise.

Will Kevin Feige appear on-screen in She-Hulk? While we don’t know if Kevin Feige will just be referenced on the show or if he will do a Lee-style cameo, his position as the creative heart of the Marvel Cinematic Universe is unassailable. Much as Lee acted as both a creative and a spokesperson for Marvel, Feige has been shepherding Marvel Multiverse stories since 2008 while also acting as the public face of Marvel’s unchallenged box office success.

As Lee helped bring forth characters like Doctor Strange, Thor, and Iron Man, Kevin Feige has spun them into the most successful film property in cinema history. Feige’s unparalleled run with Marvel Studios puts him in a creative class with the greats — including Stan Lee. Arguably the most effective producer ever, Kevin Feige is regarded as a true visionary by many Marvel fans.

Feige also steps up as the mouthpiece of Marvel Studios whenever there is a controversy or rumor to confirm or squash — making him the face of the Marvel Cinematic Universe.

If Fiege ever decides to pass the torch to another — or likely a team of others — to continue his legacy of excellence in Marvel Cinematic Universe, perhaps he’ll take on that same role Stan Lee role. The joyful ambassador of a special brand, who steals scenes in every blockbuster he’s in.

How do you think Kevin Feige’s legacy compares with that of icon Stan Lee? Let us know in the comments, true believer!