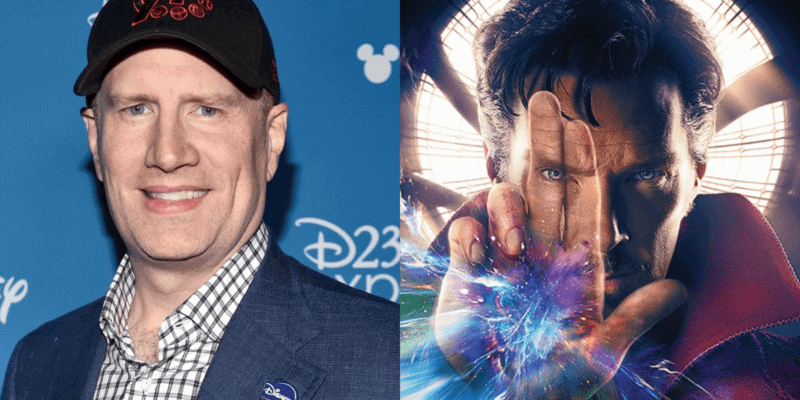 Marvel Studios President Kevin Feige is owning up to criticisms of whitewashing Asian characters in the Marvel Cinematic Universe. In a new interview, Feige admits to past missteps in casting white actors in the roles of traditionally Asian characters, most notably in Marvel movies Doctor Strange (2016) and Iron Man 3 (2013).

With the film Shang-Chi and the Legend of the Ten Rings (2021) due out this fall, Feige commented on an opportunity for Marvel Studios to learn from their mistakes.

In 2016, Marvel Studios faced criticism from Marvel fans for casting Tilda Swinton in the role of the Ancient One instead of an Asian actor. After a decade of films with minimal Asian representation, the casting of Swinton, a white woman, in a role depicted as an Asian man in Marvel Comics, was not taken well by many fans.

With the Ancient One of the Marvel Cinematic Universe also residing in the South Asian nation of Nepal, the casting was particularly puzzling.

In 2013, Marvel Studios faced similar scrutinization for their decision to cast Ben Kingsley as Tony Stark’s foe The Mandarin in the film Iron Man 3. Ultimately, Kingsley’s casting proved to be a misdirection similar to Ralph Boehner (Evan Peters) in WandaVision. Even so, some fans felt the underrepresentation of Asians in the Marvel Cinematic Universe was apparent.

In promotion of Shang-Chi and the Legend of the Ten Rings, Marvel boss Kevin Feige spoke to Men’s Health about the decision to cast Tilda Swinton as the Ancient One in Doctor Strange (2016), a role she later reprised in the film Avengers: Endgame (2019). Admitting to Marvel Studios’ gaffe, Kevin Feige explained the lessons he and the studio learned after the reaction of Marvel fans to Swinton’s casting, saying:

In the same Men’s Health piece, Shang-Chi star, actor Simu Liu shares his initial disappointment to Marvel’s announcement of the Shang-Chi film, fearing a shallow Asian stereotype was on deck for the Marvel Cinematic Universe. Sharing his first reaction to the film’s announcement (prior to his casting as the lead) Liu said:

“I was like, how many opportunities do we have for Asian superheroes, and this one guy is, like, just a kung fu master? It just felt kind of reductive and, you know, not true to life and not anything that I could relate to.”

Feige said Marvel has reinvented Shang-Chi, making him a far more rich and compelling character than the Bruce Lee knock-off found in the pages of Marvel Comics. The character’s relative obscurity gave Marvel Studios the chance to alter Shang-Chi’s story in a way that positively represents Asians in the MCU.

Kevin Feige made headlines when he revealed that Doctor Strange had his planned WandaVision cameo scrapped in the eleventh hour when the team behind the series decided they wanted to avoid the cliché of a white guy swooping in to mansplain things. Benedict Cumberbatch even had a deal finalized to appear in a Doctor Strange cameo opposite Elizabeth Olsen’s Avenger, Wanda Maximoff in the WandaVision finale — to tease Doctor Strange in the Multiverse of Madness (2021) — before ultimately having it pulled.

Marvel Studios continues to demonstrate a commitment to building a more diverse and inclusive Marvel Cinematic Universe. Notably, Sam Wilson (Anthony Mackie) recently took on the mantle of Captain America in The Falcon and The Winter Soldier — a series that featured a storyline about Isaiah Bradley (Carl Lumbly) and his struggles with oppression and mistreatment at the hands of the American government as a black man.

With diverse casting in The Eternals, Black Panther: Wakanda Forever, and the Captain Marvel (2019) sequel The Marvels, Marvel Studios appears to be holding itself to a higher standard of inclusive storytelling.

Kevin Feige is looking towards the future of Marvel Studios, as he apparently intends to stick around for awhile. In new article from Variety, insiders say that while rumors swirl about Feige taking on a role within the Star Wars universe, the super producer remains committed to telling stories within the Marvel Cinematic Universe.

Back in 2019, it looked as though Kevin Feige would in fact trade his universe for a galaxy when it was reported he would tackle a Star Wars film — and perhaps even take the reins from current Star Wars head honcho Kathleen Kennedy. The head writer of Loki was even reportedly attached to the project, though information has been scarce since.

Is Marvel Studios on the right track to giving Marvel fans a more diverse and inclusive Marvel Cinematic Universe? Let us know what you think in the comments!