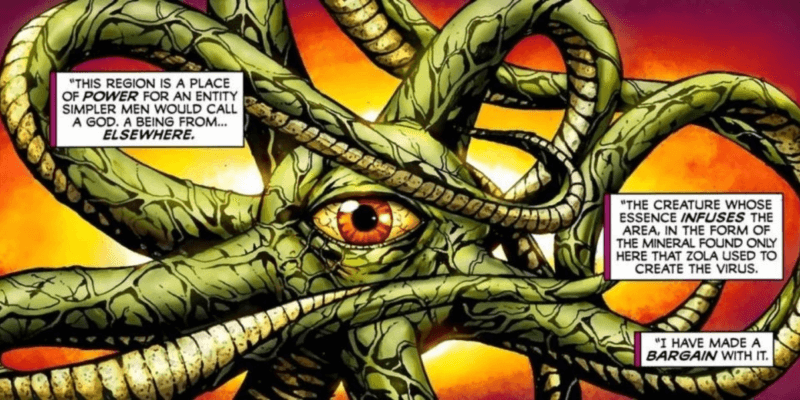 Doctor Strange in the Multiverse of Madness will hit movie theaters in March 2022, but fan speculation is well underway for what is sure to be a pivotal moment in Marvel’s Phase 4. And new rumors making the rounds have one of the strangest villains in Marvel Comics history taking on the Sorcerer Supreme in his upcoming sequel.

What Do We Know So Far About Doctor Strange 2

There as many rumors surrounding Doctor Stephen Strange (Benedict Cumberbatch) and his return to the Marvel Cinematic Universe as there are sure to be new alternate realities that will be introduced in the Doctor Strange sequel. Though we have not seen Benedict Cumberbatch since Avengers: Endgame (2019) fans will get to see him before his second film since he is set to appear in Spider-Man: No Way Home.

We know that the Doctor Strange sequel will pick up after the multiverse nonsense that is sure to come in Spider-Man: No Way Home. The third Marvel Spider-Man film starring Tom Holland is rumored to bring in alternate versions of Peter Parker played by Tobey Maguire and Andrew Garfield – though that has not been confirmed.

We can confirm that Elizabeth Olsen’s Scarlet Witch/ Wanda Maximoff will play a pivotal role in Multiverse of Madness, fresh off her Disney+ original TV show WandaVision. Marvel fans’ best guess is that she will be trying to find a way to use her new magical powers to reunite with her twin sons Billy/Wiccan (Julian Hilliard) and Tommy/ Speed (Jett Klyne).

It expected that Billy and Tommy will be introduced to a fellow Young Avenger who was confirmed for Doctor Strange in the Multiverse of Madness – America Chavez a.k.a. Miss America portrayed by Xochitl Gomez. And we also know that Rachel McAdams will return as Christine Palmer and Chiwetel Ejiofor will return as Baron Mordo. And Benedict Wong is returning as Wong, Doctor Strange’s closest ally.

Now, according to a new report, Marvel Studios is planning on using Shuma Gorath in Doctor Strange in the Multiverse of Madness.

Who or What is Shuma Gorath

According to the rumor, Shuma Gorath will be directly pursuing America Chavez in order to control her ability to cross between the realities. America does this by punching star-shaped portals and jumping through them. It is likely that the monster will drive her away from her home dimension on the Utopian Parallel.

Shuma Gorath first appeared in “Marvel Premiere #5” in 1972 and is one of the Elder Gods in Marvel Comics. He ruled over the Earth a million or so years ago before being banished to another reality by a time-traveling sorcerer. He has been bitter foes with the magic users of Earth ever since, including the Ancient One (Tilda Swinton) and the Sorcerer Supreme.

Also known as one of the “old ones”, Shuma Gorath and the other “many angled ones” were once the same entity that existed in the space between dimensions. They then branched apart from each other and when Shuma Gorath became its own being it ended up on Earth -616 (the main Earth of Marvel Comics) and ruled over the humans there, by feasting on them and demanding blood sacrifices.

Shuma Gorath tried to return to the Earth many times in Marvel Comics. Once during the Hyborian Era where he battled Conan the Barbarian. In the modern era, Shuma Gorath once tried to use the Ancient One’s mind as a portal back to the human realm.

In one of Shuma Gorath’s most epic clashes with Doctor Strange, the Sorcerer Supreme had to resort to using dark magic to banish him back to his own realm. He merged with the demon and impaled himself. While Stephen Strange ultimately survived the encounter, he suffered the effects of being tainted by the dark magic for some time afterward.

What Are Shuma Gorath’s Powers And Abilities

The chaos demon, usually depicted as a giant eyeball with tentacles like something out of Lovecraft, has the ability to control the minds of others even from another dimension. Director Sam Raimi has promised that the marvel movie will explore the mystical and more psychedelic side of the Marvel universe and a character like Shuma Gorath would certainly fit the bill.

When Shuma Gorath tried to enter the world through the Ancient One there was no way to free him and Doctor Strange was forced to kill his magical mentor. Shuma Gorath, like many of the demons in Marvel Comics, is more powerful in his home dimension, which in this case is the Chaos Dimension. But even with only the fraction of his powers that his access to on Earth, Shuma is able to pass through objects at will, levitate and change his form.

He has also been depicted as being able to shoot powerful magical blasts like we have seen Scarlet Witch do in WandaVision. But his most important power in terms of what MCU fans can expect in Doctor Strange in the Multiverse of Madness is his telepathy and his power to possess the bodies of others even dimensions away.

His ability to take over the bodies of his victims could unleash unspeakable evil if he were to take over the strongest Avenger – the Scarlet Witch. Her new ability to re-write reality that she used in WandaVision in the hands of Shuma Gorath could spell disaster in the Doctor Strange sequel.

Who Else Could Face Off Against Doctor Strange?

Before this rumor, one of the front-runners for the main antagonist in Doctor Strange 2 was Chthon. He was first thrown around after the finale of WandaVision when Kathryn Hahn’s Agatha Harkness pulled out the Darkhold and taught Wanda about her chaos magic. Like Shuma Gorath, Chthon is another Marvel elder god and is a tentacled demon with the ability to influence minds across reality.

Chthon is deeply connected with giving Wanda her magical powers in the comics and creating her new spellbook, which might unleash the demons on Earth. It’s possible that Marvel Studio boss Kevin Feige could combine the two elder gods into one character.

Another name that has been thrown around is the demon Nightmare. It was even rumored that Marvel Studios might have brought on David Tennant (Doctor Who, Jessica Jones) to take on one of Stephen Strange’s most notorious villains.

The Fear Lord has the ability to pull people’s souls out of their bodies while they are asleep. He can bring them to his Nightmare Realm within the Dream Dimension. There he is able to torture them. While he might be as powerful as an elder god, he can go toe to toe with other demons like Mephisto.

You know we had to say Mephisto. Marvel fans firmly believed that the MCU would bring Marvel Comics devil to WandaVision – though they were wrong. But many are still holding up hope that Mephisto could appear in either of the upcoming Doctor Strange or Spider-Man movies.

While nothing has been confirmed at this time, it is likely that whatever villain Doctor Strange and Scarlet Witch encounter in the Marvel movie — it will be chasing America Chavez as her power is sure to be a catalyst for the multiversal madness that will be unleashed.

Doctor Strange in the Multiverse of Madness has finished filming so check back here for more updates!

Comments Off on ‘Doctor Strange 2’ Villain Will Melt Your Mind