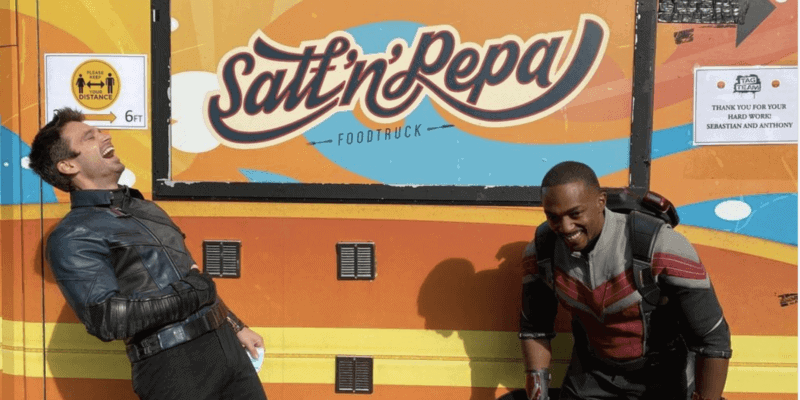 On Sunday, May 16, Anthony Mackie attended the 2021 MTV Movie and TV Awards, where he was nominated for ‘Best Hero’ in his role as Sam Wilson — AKA Falcon — in the new Disney+ show, The Falcon and the Winter Soldier. Mackie won the award and spoke to reporters about a number of topics, including his costar, Sebastian Stan.

While speaking with a Variety reporter, Mackie was asked what he thought about his co-star Sebastian Stan’s newest role as Tommy Lee in the new Hulu mini-series Pam & Tommy. The Falcon and the Winter Soldier actor admitted that at first, he was shocked to hear that Stan would be playing the role. According to Variety:

“He sent me a video on set and a few photos and I was blown away,” Mackie said. “I was really surprised and impressed that he was able to do it. I was horrified. I was like, ‘What are you doing?! You’re playing Tommy Lee?’…It’s just humbling when you see your friend and he succeeds. And he crushed it.”

Pam & Tommy will star Sebastian Stan as rocker Tommy Lee and Lily James as Pamela Anderson. The new show will focus on the couple’s tumultuous, highly-publicized relationship. Stan has shared updates on his Instagram page that show his incredible transformation into the Mötley Crüe drummer.

“Sebastian is a great actor…people being able to see him for the chameleon that he is, not just the beautifully amazing, blue-eyed god that he is — it’s very refreshing to see your friend win.”

The Falcon and the Winter Soldier premiered on Disney+ on March 19, 2020, and showed Sam/Falcon teaming up with an unlikely ally, Bucky Barnes — AKA The Winter Soldier — in order to take down an anti-nationalist group, The Flag Smashers. The series received rave reviews from fans and recent Emmy submissions for Best Drama Series and could indicate a possible second season. Sebastian Stan has also signaled that he would love to return for another season.

Marvel has not confirmed future seasons for The Falcon and the Winter Soldier at this time.

Will you be watching Sebastian Stan when he plays Tommy Lee in the new Hulu series? Let us know in the comments!