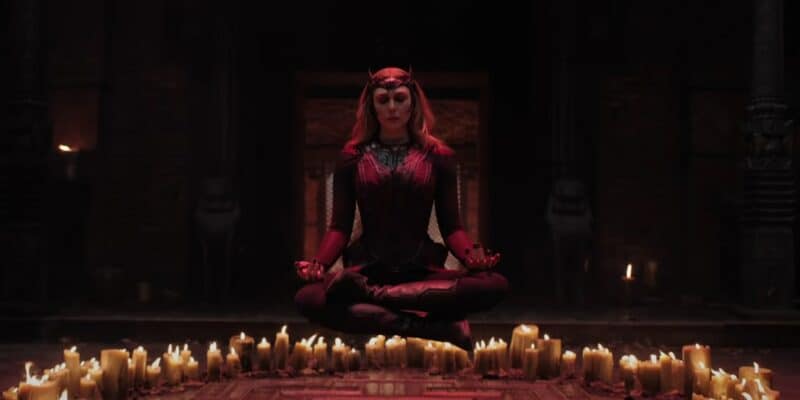 New details from WandaVision reveal a connection to Asgard.

At the end of the nine-episode series, Elizabeth Olsen’s Wanda Maximoff/Scarlet Witch takes the Darkhold from Agatha Harkness. Wanda is then seen in her astral form learning magic from the ancient text. The Darkhold’s magic is not considered to be safe, and this book has a long and troubled history of causing problems in the Marvel universe.

Marvel recently released a new book, Marvel’s WandaVision: The Art of the Series, which discusses the design of the Darkhold. Russell Bobbitt, the series’ prop master revealed that the Darkhold contained a piece of Yggdrasil which was last seen in Thor: The Dark World (2013). Bobbit went on to explain how his team came up with the design:

“Their design is what we used, and actually London made the spell book for us. The binding has hieroglyphics on it, and the pages have this sort of Doctor Strange-esque feel to them as if it were a book from the library in the Kamar-Taj.”

It makes sense why Marvel wanted to get the look of the Darkhold to fit into the MCU. It will definitely serve a large role in the future of the Marvel Cinematic Universe. The Darkhold has a lot of connections to the more supernatural side of the MCU as Blade, Doctor Strange, Scarlet Witch, and Moon Knight have encountered the book in the comics.

Marvel continues to pass the torch to newer heroes, the Avengers won’t be alone to defend the world. It is only a matter of time before we see the Young Avengers, Illuminati, Defenders, Midnight Sons, X-Men, Fantastic Four, and the Thunderbolts enter the MCU.

Do you think Thor: Love and Thunder will show more of Yggdrasil? Do you think the World tree is destroyed after Ragnarok? Let us know what you think in the comments below.

Comments Off on ‘WandaVision’ Secretly Had A MAJOR Connection To ‘Thor’