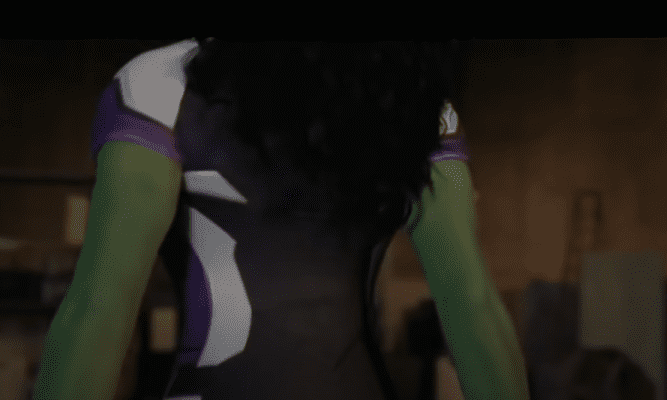 The upcoming Disney+ show will star Maslany as Jennifer Walters/She-Hulk, Mark Ruffalo returning as Bruce Banner/Hulk, and Tim Roth reprising his role as the Abomination. The show has been confirmed to be a legal comedy and has Walters take on legal cases involving superheroes.

Many fans are excited to see She-Hulk and learn what has happened to Bruce Banner since Avengers: Endgame (2019) as the character’s condition seems to be a source of confusion for fans. Since Hulk won’t be receiving his own movie or series, Ruffalo has confirmed that this will be his way of “passing the torch” as the new superhero will step into his shoes.

New reports of a leaked tape audition for a Marvel villain have potentially revealed one of She-Hulk’s clients. The tape focuses on a client discussing his divorce settlement with two lawyers.

The tape was posted online here, but it has now been taken down. Marvel must have caught word and had the leaked audition tape removed to avoid more spoilers. This didn’t stop other sources from covering what was on the tape.

The conversation between the client and the two lawyers begins with the client calling himself Doctor Revive and explaining why he divorced his wife. Doctor Revive wanted out of the relationship and he decided the best thing to do would be to kill himself. Since he can revive himself from the dead, this seemed like the best option for the character. This led to one of the female lawyers getting upset after Doctor Revive described his actions as a “considerate way to end the marriage” which led to this exchange on the tape:

Female lawyer: “Are you really that afraid of confrontation?! Seriously?!

Female lawyer: “Obviously, relationships can be hard, but there is also just basic respect!”

Even though Mister Immortal never went by the name, Doctor Revive, it can definitely be the MCU’s adaptation of the character. In the comics, Mister Immortal would die several times and would come back alive after a period of time. When he would come back to life, his weakness was that the character would have a fit of rage which would lead him to not make the best decisions.

Mister Immortal was also a mutant in the comics which leaves the room for She-Hulk to be the first series to have mutants play a large role since the Fox acquisition of the mutants and X-Men. With Patrick Stewart appearing as Professor X/Charles Xavier in Doctor Strange in the Multiverse of Madness (2022), it would be interesting if more mutants began to show up across the Marvel Cinematic Universe.

She-Hulk makes sense to include some of the more unusual mutants as they would end up getting into some weird legal conflicts and Jennifer Walters would be the best lawyer to help them.

Do you She-Hulk will introduce mutants like Mister Immortal? Which mutants would you like to see show up in the MCU? Let us know what you think in the comments section down below!