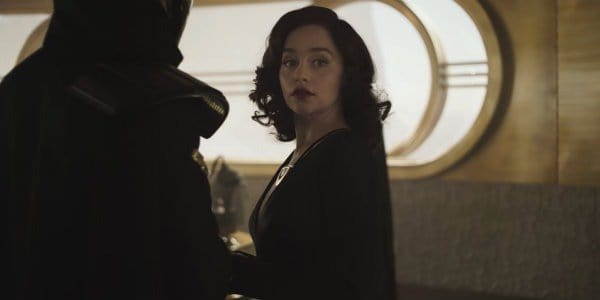 Marvel’s Secret Invasion series starring Samuel L. Jackson as former SHIELD Director Nick Fury is currently filming in the UK. This makes it the latest Marvel Cinematic Universe project hit by leaks from the set. Secret Invasion has no confirmed release date in Marvel’s Phase Four but is expected to hit the Disney+ streaming platform in 2023. The latest leak could give Marvel fans their best guess yet as to how Emilia Clarke (Game of Thrones, Star Wars) will fit in the MCU.

Secret Invasion will adapt the Marvel Comics storyline of the same name, Secret Invasion (2008) by Brian Michael Bendis. In that comic book, the shapeshifting Skrulls – first introduced in Captain Marvel (2019) starring Brie Larson as Carol Danvers/Captain Marvel – secretly replaced Earth’s Mightiest Heroes in a plot to take over the world.

Marvel boss Kevin Feige has been tight-lipped about what Marvel fans can expect in the MCU’s Secret Invasion. The most recent leak revealed that Rogers: The Musical will be returning as an Easter Egg. The musical was first seen on Marvel’s original series on Disney+ Hawkeye, starring Jeremy Renner as Clint Barton/Hawkeye and Hailee Steinfeld as future Young Avenger Kate Bishop/Hawkeye. It showed up again in Spider-Man: No Way Home (2021), starring Tom Holland, Andrew Garfield, and Tobey Maguire as Peter Parker/Spider-Man.

Both Hawkeye and No Way Home featured cameos from Marvel’s Netflix series, Charlie Cox as Matt Murdock/Daredevil and Vincent D’Onofrio as Wilson Fisk/Kingpin. This has led to rumors that Krysten Ritter could return as Jessica Jones in Secret Invasion.

Secret Invasion has nearly as many rumored cameos as Doctor Strange in the Multiverse of Madness (May 6, 2022). This includes Tom Hiddleston as Loki(Loki), Anthony Mackie as Sam Wilson/Captain America, the superhero formerly known as Falcon (The Falcon and The Winter Soldier), Iman Vellani as Kamala Khan/Ms. Marvel (Ms. Marvel), Michael B. Jordan as Killmonger (Black Panther), Jonathan Majors as He Who Remains/Kang the Conquerer (Loki, Ant-Man and The Wasp: Quantumania), and Clark Gregg as Agent Phil Coulson (Agents of S.H.I.E.L.D).

But confirmed for Secret Invasion are Ben Mendelsohn as Talos, Cobie Smulders as Maria Hill, and Kingsley Ben-Adir, Killian Scott, Olivia Colman, and Emilia Clarke in unnamed roles. Emilia Clarke is rumored to be SWORD commander Abigail Brand, although, in other leaked photos, she is missing Abigail’s signature green hair. And the new clip leaked by  Twitter user @Daenerys4lyfe shows that she will be helping Nick Fury and Talos take on the evil Skrulls.

Emilia Clarke is joining the Marvel Cinematic Universe after her success on HBO’s Game of Thrones, based on the books by George RR Martin where she played Daenerys Targaryen. She is the second Game of Thrones actor to come to the MCU after Kit Harrington, who played Jon Snow, showed up in The Eternals as Dane Whitman/Black Knight. She previously worked with Disney on Lucasfilm’s Solo: A Star Wars Story (2018), where she played Han Solo’s (Alden Ehrenreich) love interest  Qi’ra.

There is a lot still coming from the Marvel Cinematic Universe. On Disney+, you can expect Moon Knight on March 30, Ms. Marvel in Summer 2022, and She-Hulk to debut this year. In theaters, Doctor Strange In the Multiverse of Madness comes out on May 6, followed by Thor: Love and Thunder on July 8, and  Black Panther: Wakanda Forever on November 11.

Let us know in the comments below if you are ready to see Secret Invasion.