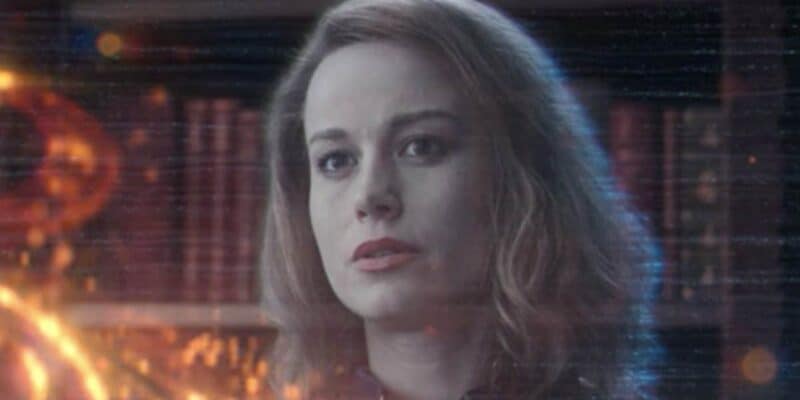 Next year will see the official return of Brie Larson’s Avenger, Captain Marvel. By the time, director Nia DaCosta’s superhero sequel airs, the Carol Danvers actress will have been in Kevin Feige’s Marvel Cinematic Universe for almost four years.

It’s clear that Larson’s time in the MCU has not been without controversy, in fact, the Academy Award-winning actress still remains one of the more contentious parts of Feige’s Marvel Studios to this day. Now, as The Marvels (2023) closes in on its debut, could Captain Marvel pose an even bigger risk for the future of Phase Four?

When Anna Boden and Ryan Fleck’s Captain Marvel (2019) was released, it formed the glue that held the Russo Brothers’ Infinity Saga finale movies, Avengers: Infinity War (2018) and Avengers: Endgame (2019), together.

After appearances in Avengers: Endgame, where she rescues Tony Stark/Iron Man (Robert Downey Jr.), and the mid-credits scenes in Avengers: Infinity War and Shang-Chi and the Legend of the Ten Rings (2021), when she appeared with fellow Avenger Dr. Bruce Banner/Hulk (Mark Ruffalo), Larson will return in her 2023 Marvel universe sequel, The Marvels.

Initially promoted as Captain Marvel 2, Marvel Studios eventually confirmed the sequel would be coined The Marvels, focusing not just on Carol Danvers but Kamala Khan/Ms. Marvel (Iman Vellani) and Monica Rambeau (Teyonah Parris), as well. This posed questions of whether Larson’s time in the MCU will soon be over, replaced by the latter characters for Phase Five and beyond. This is something that may also happen to Loki actor, Tom Hiddleston, who has stated something rather surprising recently.

But, before Larson’s potential departure from the MCU, DaCosta’s The Marvels will see Captain Marvel re-enter the fold long after her epic duel with Thanos (Josh Brolin) at the decimated Avengers Compound in Endgame. If one thing was clear from Captain Marvel’s return, it was her immense strength and ownership over her powers, leading her to almost best the Mad Titan alongside characters like Captain America (Chris Evans), Thor (Chris Hemsworth), and Black Panther (Chadwick Boseman). This came after Danvers defeated the Supreme Intelligence (Annette Bening) and broke free of the restrictions placed on her since she absorbed the Tesseract’s power.

Recently, comments from Larson have suggested that Captain Marvel maybe even more powerful in The Marvels which begs the question — is the character simply too strong for stakes to even matter in the MCU’s Phase Four?

Speaking to Insider, Larson — who has also been attached to Star Wars — commented on the Avenger’s strength in the comic book movie, and how she needed to work on her own physicality to bring the character to life successfully. She said:

“In the first film she’s developing that strength, and so I was developing my own personal strength with this one […] She’s already got more mastery over her powers. She can fly now. And so having my body more limber, more ready for these types of movements like wirework, which I didn’t have to do as much on the first one, was the main goal.”

Essentially as Captain Marvel’s powers grow, and with the potential official debut of Binary, the character risks eliminating the element of stakes from The Marvels and the greater Phase Four. Instead of the timeline being an issue of stakes, as seen in Scarlett Johansson’s Black Widow (2021), the very lead character could cause the plot to feel slack due to her immense power — something that Marvel has not been afraid to hide in previous installments of the MCU.

Before her return in Endgame, Marvel Studios had the female superhero saving other worlds off-screen, largely for this very reason. But, with The Marvels being a Captain Marvel-centric story, there is no hiding for the character. Unless Parris and Vellani’s roles are much larger in the Captain Marvel sequel than fans first thought.

A similar thing is happening with the deep-dive into the Marvel Multiverse. In opening these opportunities in television series like Loki, and movies like Ton Holland’s Spider-Man: No Way Home (2021) and Benedict Cumberbatch’s Doctor Strange in the Multiverse of Madness (2022), Marvel runs the risk of eliminating any excitement, shock, and finality out of the franchise.

Do you think Marvel could risk ruining the stakes of Phase Four and beyond? Let us know in the comments down below!