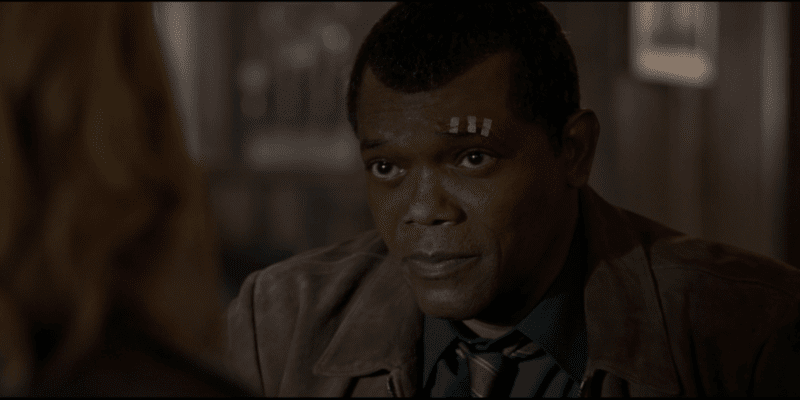 Marvel alum, Samuel L. Jackson who plays Nick Fury went to Instagram and teased that he might be appearing as a young Nick Fury in one of the upcoming MCU shows, Secret Invasion.

Details for Secret Invasion are limited, but filming has been happening in the UK. Some pictures of the set have been posted online showing Samuel L. Jackson with a new look as he is no longer wearing his classic eyepatch and has a large beard. Other pictures revealed Game of Thrones alum, Emilia Clarke on set. There are no details regarding what role she is playing. Other pictures show that Cobie Smulders is reprising her role as Maria Hill and will be joining Nick Fury. Ben Mendelson who plays the Skrull, Talos, has also been spotted which makes sense since Secret Invasion is all about Skrulls invading Earth.

The post shows Samuel L. Jackson with a goatee that is very similar to his original look in The Avengers (2012). Secret Invasion is supposedly going to focus more on Nick Fury and Ben Mendelson’s Talos as both of them will most likely work together to stop the invading Skrulls. In Captain Marvel (2018) the MCU had changed some of the original backstories for Talos and the Skrulls. Originally, Talos couldn’t shapeshift and was an outcast.  Now, he is a leader of the refugee group trying to escape from the Kree when Brie Larson’s Captain Marvel helps save them.

The Skrulls have normally shown up as villains in the comics, but the MCU introduced them as refugees from the Kree-Skrull War. Marvel has teased in Spider-Man: Far From Home (2019) that Talos and some Skrulls are working with SWORD and had another scene in WandaVision showing Monica Rambeau (Teyonah Parris) meeting a Skrull. So far we have seen the Skrulls who are on Nick Fury’s side, but now it seems that some of the Skrulls have different plans and may possibly be trying to invade the world.

Primary overseer for Secret Invasion, Jonathan Schwarz gave us an idea of what to expect with adapting the comic storyline for the Marvel Cinematic Universe:

Like all of [Marvel’s] adaptations, it’s definitely not a 1:1 adaptation of the comic books, although it takes a lot of that kind of paranoid spirit, and runs with it.I think that’s literally everything I can say about it. We’re going to leave the secret in Secret Invasion for now.

The idea of really focusing on the paranoia spirit as described by Schwarz will definitely allow the series to be tense and suspenseful as anyone working for Nick Fury can be a Skrull. Once the Skrulls learn that Fury is onto them, it is very possible that the tension in the series will escalate as Kevin Feige has made it clear that this show will have fewer characters than in Endgame. The main focus of the show will be on Fury and Talos rather than having an Avengers lineup like in the comics. Kevin Feige confirmed that Marvel was really focusing on the paranoia aspect as he shared to another source:

Well, there were more characters in the Secret Invasion comic series than there were in Endgame so, no. It’s not that but it very much is a showcase for Sam Jackson and Ben Mendelson and tapping into the paranoia elements of the Secret Invasion comic series that was great with the twists and turns that that took. So, that’s certainly our focus more than, ‘Can we cram in more characters than Endgame?’

No release date has been announced for Secret Invasion, but it will most likely debut next year in 2023.

Are you excited for Secret Invasion? Let us know in the comments below!