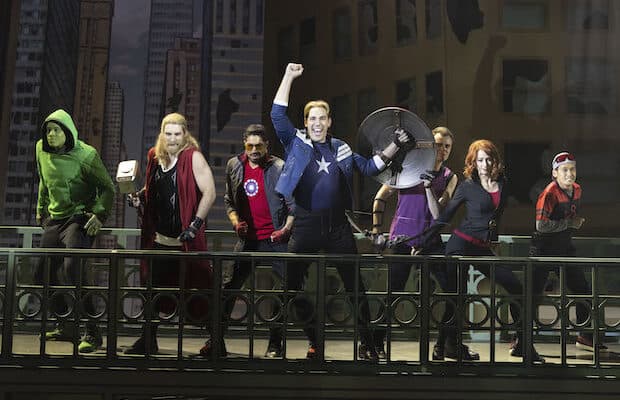 Secret Invasion might end up giving fans more of Rogers: The Musical.

It has been a while since fans have seen Samuel L. Jackson’s Nick Fury, as the last time fans saw the once director of SHIELD was back in Spider-Man Far From Home (2019) in a post-credits scene. Tom Holland’s Spider-Man believed he was working with Nick Fury, but at the end of the movie, it was revealed to be Ben Mendelson’s Talos impersonating Fury.  Secret Invasion will also include Maria Hill (Cobie Smulders), Talos (Ben Mendelson), and Emilia Clarke. The show is rumored to focus on Fury handling a Skrull invasion on Earth. Not many details are known about the story but the show is currently filming and leaked images of the sets have surfaced online.

Some recent photos of the Liverpool Street Station in Central London have surfaced online which makes sense as the show will take place over the globe. It seems that the Skrull invasion is bigger than fans originally thought as Fury will have to go across the globe to take out the shape-shifting aliens. It will be interesting to see how the Marvel Cinematic Universe will handle the Skrulls for Secret Invasion as Brie Larson’s Captain Marvel (2019) made the Skrulls not appear to be the enemy.

Twitter users @Roxmanoff and @phil_pott shared some pictures of the set for Secret Invasion as they pointed out that yes, Rogers: The Musical continues to find to be seen in the MCU:

LOWKEY SCEAMING ON THE INSIDE 🤯🤯🤯

LOWKEY SCEAMING ON THE INSIDE 🤯🤯🤯 pic.twitter.com/huOthv0RIZ

This from Liverpool Street station the Rodgers The Musical poster & newspaper showing Rhodey Rhodes on the front say Marvel the clapperboard said Jumbalaya which is the title Secret Invasion is filming under not sure who the main actors were here though#MCU #BTS #SecretInvasion pic.twitter.com/h1wtKEPD2B

This is now the third time the Avengers musical has been spotted in the MCU and fans will hope that it’s nothing more than an easter egg. For Hawkeye Episode 6, fans had to wait through the entire musical number “I Can Do This All Day!” as they believed there would be another post-credit scene after the musical number. Marvel tricked fans leaving several people to be disappointed that the MCU didn’t tease of their future projects.

At the moment, there is no set release date for Secret Invasion, but since it is filming right now, it’s possible for the upcoming MCU show to debut on Disney+ in 2023.

Do you think we will more of Rogers: The Musical? Do you want to see more of the Musical? Let us know what you think in the comments section below!