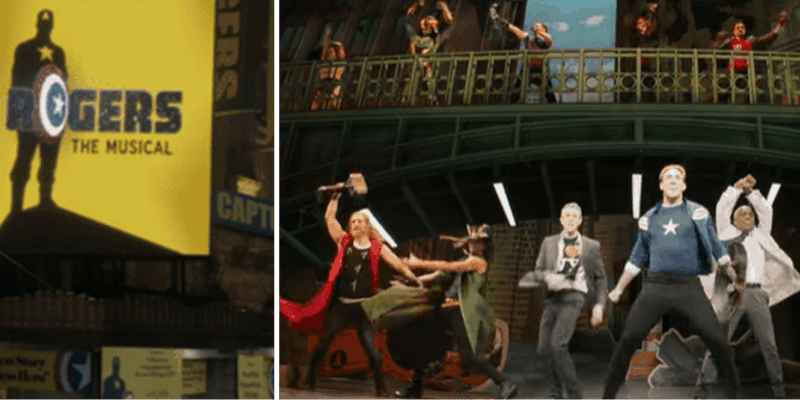 A musical with Captain America (AKA Steve Rogers) as the star? Hear us out! When the trailer for the highly anticipated Hawkeye series coming to Disney+ was released, Marvel fans quickly spotted a unique teaser that created a buzz around the Marvel Cinematic Universe. And now, we’re learning that indeed, “Rogers: The Musical” will be coming to life… on screen!

During the Hawkeye trailer, Marvel revealed a brief scene with “Rogers: The Musical” signs as shown in the image above. It was enough of a plug that Marvel fans began demanding a Steve Rogers musical! Now, Marvel has taken to Twitter to share the big news tweeting, “Curtain up on Rogers: The Musical! Songwriting duo @MarcShaiman and Scott Wittman brings Broadway to the MCU in Marvel Studios’ @HawkeyeOfficial.”

Yes, you read that right! Marvel continues to report: Curtain up on Rogers: The Musical. The latest Disney+ series from Marvel Studios, Hawkeye, features one show-stopping musical number focused on the Avengers and the Battle of New York. Marvel.com can reveal that long-time, award-winning, songwriting team Marc Shaiman and Scott Wittman — who co-wrote the lyrics, with Shaiman also producing the actual song recording — penned the number from Rogers: The Musical in the series. And it all started with, as Shaiman told Marvel.com, Kevin Feige being a “film score nerd.”

Get this, when Shaiman and Wittman were pitched the idea of working on “Rogers: The Musical” both admitted that neither of them was very well-versed in the Marvel Cinematic Universe. Of course, that quickly changed as the assignment was delivered during the height of the pandemic, allowing the songwriting team to binge-watch Marvel films.

While Marvel doesn’t give away too much about “Rogers: The Musical”, we do know that the backdrop of the musical will be an epic Avengers battle with the focus idea of “save the city.” Since the musical was written during the pandemic the focus was naturally on ‘someone please save New York,’ was the battle cry of [the song].”

RELATED: First TWO Episodes of Marvel’s ‘Hawkeye’ to Be Released on the SAME Day!

Marvel goes on to share “with the premiere of Marvel Studios’ Hawkeye right around the corner, Shaiman and Wittman are excited for Rogers: The Musical to finally be out there for fans, with Shaiman teasing”:

“We’ve got some fantastic singers on this track, so I can’t wait for people to hear.” But on top of that, both are excited for fans to start singing (and dancing) along to it, too.” “It’s been so thrilling to watch those reaction videos to the trailers,” Shaiman continued. “We’ve worked on a lot of stuff that goes around the world, but man, there’s nothing like the Marvel fans and how they look [for hidden details] and everything. It was just wonderful to see how happy they were about the musical and that they understand Marvel’s sense of humor. They’re just so looking forward to it. It’s really thrilling.”

Hawkeye is the highly anticipated new Disney+ series set in post-blip New York City. Former Avenger Clint Barton (Jeremy Renner) has a seemingly simple mission: get back to his family for Christmas. Possible? Maybe with the help of Kate Bishop (Hailee Steinfeld), a 22-year-old archer with dreams of becoming a Super Hero. The two are forced to work together when a presence from Barton’s past threatens to derail far more than the festive spirit.

If you’ve missed the trailer, check it out here:

Hawkeye will start streaming as a new Original Series beginning November 24 on Disney+.

Are you ready to see “Rogers: The Musical” come to life during the Hawkeye series?