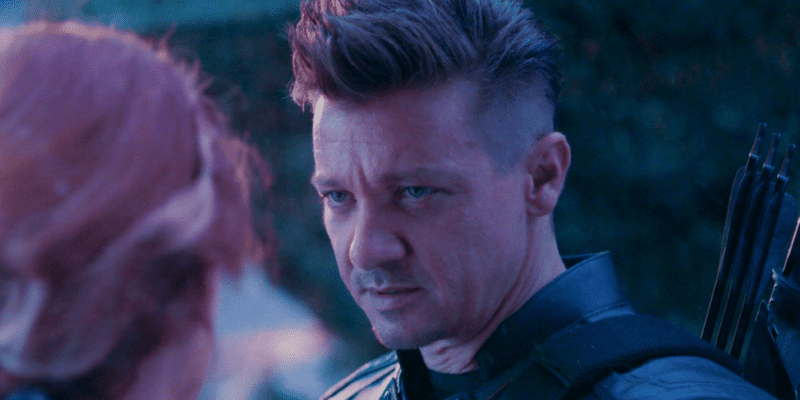 The latest Hawkeye trailer from Marvel Studios dropped this week and fans were surprised and relieved to see Clint Barton (Jeremy Renner) reunited with his wife, Laura (Linda Cardellini). Laura Barton was conspicuously absent in the first Hawkeye trailer, leading many fans to suspect there was trouble at home in the Barton household.

In Avengers: Age of Ultron (2015), audiences were introduced to the Bartons. The glimpse into the home life of the founding Avenger was some of the first real backstory Marvel fans were given for the mysterious expert marksman.

The reveal of Jeremy Renner’s Hawkeye as a family man was something of a surprise to audiences at the time. The spell in Missouri not only allowed the Avengers to regather their strength and come up with a strategy for battling Ultron — it showed fans another side of Hawkeye.

Linda Cardellini portrayed Laura Barton in Age of Ultron as well as Avengers: Endgame (2019). It is revealed in the opening moments of Endgame, that Barton’s entire family was snapped out of existence by Thanos following the events of Avengers: Infinity War (2018). While his wife and kids were blipped, Clint Barton took out his grief on bad guys, trading the Hawkeye mantle for that of Ronin, a deadly one-man war on crime.

When Barton helped to reverse the snap, his family blipped back to life — just in time for holidays.

The first trailer for the Disney+ streaming series — set to premiere with two episodes on November 24 — showed the Barton family attempting to enjoy some quality time together in New York for the Christmas season. That trailer introduced Young Avenger Kate Bishop (Hailee Steinfeld), and a criminal underworld dead set on getting revenge on Barton for his time as brutal vigilante, Ronin.

When the first trailer left out any sign of Laura Barton, some fans worried that perhaps Clint’s time as Ronin during the Blip caused a rift in the marriage. After all, why would Marvel Studios leave Clint Barton’s rock — played by fan-favorite actress Linda Cardellini — out of the picture? It had to be intentional, right?

Well, Marvel fans and Cardellini-heads, you can stop wringing your hands and losing sleep. Laura Barton is on the other end of the phone in the new Hawkeye trailer and all is right with the world.

The Hawkeye series cast also features Fra Free as a villain known as The Clown. Tony Dalton will play Jack Duquesne — a character from the Marvel Comics known as the Swordsman who was Clint Barton’s mentor early in his career.

Newcomer Alaqua Cox will portray Maya Lopez — the alter ego of the deaf vigilante known as Echo. Zahn McClarnon will play William Lopez, and Broadway star Brian D’arcy James has been cast in an unnamed role.

Marvel’s Hawkeye will air six episodes on Disney+ beginning with the first two on the official release date from Marvel Studios, November 24. 2021. You can catch up on the Marvel Cinematic Universe series on Disney+ — with all episodes of WandaVision, The Falcon and The Winter Soldier, Loki, and What If…? now streaming.

Are you excited to see Linda Cardelinni back as Laura Barton in Marvel Studios’ Hawkeye? Let us know in the comments!