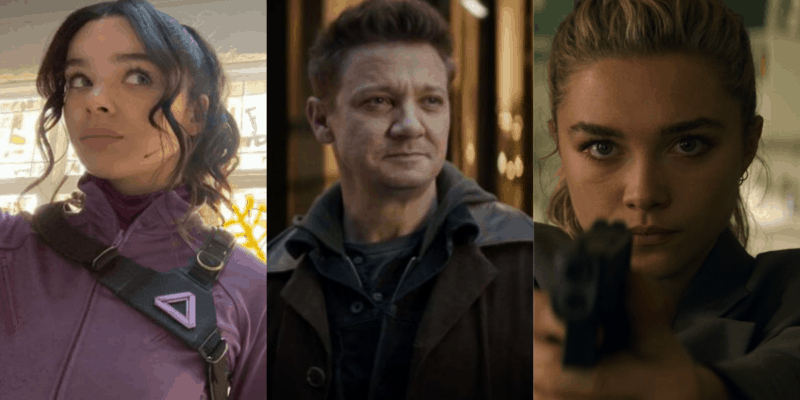 Marvel’s next streaming series for Disney+ is the highly anticipated show, Hawkeye. Even with a dazzling slate of projects on deck for the Marvel Cinematic Universe — like Spider-Man: No Way Home (2021) and Eternals (2021) — Hawkeye ranks as the most anticipated MCU project among fans on social media. The exciting Hawkeye trailer is the most “liked” trailer for a Marvel Cinematic Universe series on YouTube — outpacing the likes of What If…?, WandaVision, and The Falcon and The Winter Soldier, and Loki.

While the Hawkeye series will focus on the familiar face of Clint Barton, the Hawkeye trailer also introduced plenty of characters new to the Marvel Cinematic Universe. Marvel fans, let’s get to know the cast of Marvel’s Hawkeye.

Who is in the Hawkeye Cast?

Related: Who Is Kate Bishop in Marvel’s Hawkeye?

Who stars in Hawkeye?

Hawkeye is led by Jeremy Renner as Clint Barton, the S.H.I.E.L.D. agent turned founding Avenger that audiences have gotten to know over his numerous MCU appearances. Opposite Renner is co-star Hailee Steinfeld in the role of Kate Bishop.

In the Marvel Comics, Bishop takes utilizes her family’s wealth to fund her war on the criminal underworld. Emulating Clint Barton — dead at the time in Marvel Comics’ timeline — Bishop seeks to take on the Hawkeye mantle herself, training to become an expert archer like her idol. When Clint is revived, he becomes the mentor to Bishop. From what we know about the Hawkeye series plot, it follows that Clint Barton will mentor Kate Bishop.

Who is in the Hawkeye cast?

The Hawkeye series features a loaded ensemble cast including Vera Farmiga as Eleanor Bishop — Kate’s mother — who is rumored to portray the villain Madame Masque. The Hawkeye cast also features Fra Free as another villian known as The Clown. Tony Dalton will play Jack Duquesne — a character from the Marvel Comics known as the Swordsman who was Clint Barton’s mentor early in his career.

Newcomer Alaqua Cox will portray Maya Lopez — the alter ego of the deaf vigilante known as Echo. Zahn McClarnon will play William Lopez, and Broadway star Brian D’arcy James has been cast in an unnamed role. Florence Pugh is likely to appear in the series as her Black Widow character Yelena Belova.

What is Jeremy Renner’s background?

Related: Marvel Confirms “Major Source of Tension” as Latest Series What If…? Ends

What is Hailee Steinfeld’s background?

Hailee Steinfeld will make her Marvel Cinematic Universe debut in Hawkeye. Audiences will recognize actress Hailee Steinfeld from her popular roles in Pitch Perfect 2 (2015), Ender’s Game (2013), and voicing Spider-Gwen in Spider-Man: Into the Spider-Verse (2018). Steinfeld is a multi-talented actor, model, and singer — with 2 albums and multiple Hot 100 singles. Steinfeld’s breakthrough performance in True Grit (2010) earned the actress an Oscar nomination at the age of 13.

What is the plot of Hawkeye?

Related: Marvel May Spoil Big Spider-Verse Reveal With Maguire, Garfield in Next ‘No Way Home’ Trailer

Reunited with his family following the events of Avengers: Endgame, Barton is looking to spend some quality time with his family in New York City for the Holidays. Barton is pulled away from his family when the criminal underground he raged against during his family’s absence comes looking for payback.

Marvel Studios’ “Hawkeye” is an original new series set in post-blip New York City where former Avenger Clint Barton aka Hawkeye (Jeremy Renner) has a seemingly simple mission: get back to his family for Christmas. But when a threat from his past shows up, Hawkeye reluctantly teams up with Kate Bishop (Hailee Steinfeld), a 22-year-old skilled archer and his biggest fan, to unravel a criminal conspiracy.

Does Black Widow set up Hawkeye?

The post-credits scene of the Scarlet Johannsson film Black Widow (2021) sets up a potential plotline in the upcoming Hawkeye series. The scene featured Contessa Val (Julia Louis-Dreyfus) pointing the finger at Hawkeye for the death of Natasha Romanoff during the events of Avengers: Endgame. As Yelena Belova (Florence Pugh) is seen mourning the loss of Natasha, this scene likely signals a revenge plot involving Belova and Marvel hero Clint Barton.

When is the Hawkeye release date?

The official Hawkeye release date is Wednesday, November 24, 2021. It will premiere on Disney+, available to all subscribers.

How many episodes of Hawkeye are there?

There are six episodes of Hawkeye. The Hawkeye series will premiere on November 24 and release one of six new episodes each Wednesday until the Hawkeye Season 1 finale on December 29, 2021.

Coincidentally, the Hawkeye finale will be available on Disney+ the same day as the premiere episode of the Mandalorian spinoff Star Wars series, The Book of Boba Fett.

During the period of time when half of all life was snapped out of existence by Thanos — including Hawkeye’s wife and children — Clint Barton took out the pain of his loss on organized crime. Taking on the mantle of Ronin, Barton traded in his bow and arrow for a sword as he went on a bloody crusade against criminals.

Barton sought to atone for his ruthless and violent behavior by helping the Avengers overcome Thanos and the Infinity Gauntlet following the Time Heist. The heroes were successful in undoing the snap of Thanos and brought back all who were lost during this time.

However, while Barton is ready to leave Ronin behind him, the criminal underworld he scourged isn’t so accommodating. The bad guys — like the Yakuza or the Tracksuit Draculas — won’t let Barton’s past slide without a fight.

Who is Madame Masque?

Just who will be the main villain of Hawkeye is still a mystery. The Clown — portrayed by Fra Free in Hawkeye — was a hired gun in the pages of Marvel Comics, and is expected to remain in a hitman style role in the series as well. Echo has been both a villain and hero in the comics. However, with the series expected to explore Barton’s hearing loss, the deaf Echo is expected to be on Hawkeye’s side in the show.

The Tracksuit Draculas — the nickname given to Russian mafiosos by Barton in the comics — will play some role as series antagonists, but one theory suggests that Madame Masque will wind up being the big bad in Hawkeye.

Madame Masque is a supervillain from the comics — primarily a foe of Iron Man. She is known for being an incredible marksman, and quite deadly with a variety of weaponry. If Madame Masque is the chief antagonist in Hawkeye, many believe that actress Vera Farmiga will be playing that role.

While not officially confirmed to be a villain at all, Farmiga is one of the bigger names in the Hawkeye cast. Known for her roles in The Conjuring film series and Godzilla: King of the Monsters (2019), Farmiga is playing Kate Bishop’s mother Eleanor Bishop in the Hawkeye series. Some insiders surmise that Farmiga’s role on the Disney Plus series is larger than simply the mother of Kate Bishop, and anticipate she will be revealed as Madame Masque.

In the comics, Clint Barton first hones his skills as a marksman as a performer of trick shots in a traveling carnival. His mentor is Jack Duquesne aka Swordsman — an ace marksman in his own rite eventually revealed to be a criminal. Tony Dalton will play Jack Duquesne in Hawkeye, and is expected to have been a mentor to Jeremy Renner’s Hawkeye early in his career.

Who is Yelena Belova?

In the Marvel Cinematic Universe, Yelena Belova (Florence Pugh) is an elite assassin, trained in Russia’s brutal Red Room program alongside Natasha Romanoff. Their formative time spent together gave them a sisterly relationship, and in the film Black Widow, Romanoff and Belova reconnect and team up to take out the Red Room.

In a post-credits scene, Contessa Val (Julia Louis-Dreyfus) encourages Belova to seek out Clint Barton and seek revenge for the death of Natasha Romanoff on Vormir as depicted in Avengers: Endgame.

Rumors have been swirling that Daredevil (Charlie Cox) and Kingpin (Vincent D’Onofrio) from the canceled Netflix series Daredevil will soon join the Marvel Cinematic Universe. Most rumors have focused on the characters popping up in Spider-Man: No Way Home — especially Cox’s Matt Murdoch since he’s a lawyer and Peter Parker is in need of an attorney following the events of Far From Home (2019).

However, after the Hawkeye trailer debuted, Kingpin actor Vincent D’Onofrio tweeted a cryptic message seemingly teasing a connection to the Hawkeye series. The actor Tweeted a reference to a three-legged dog in the form of a poem, stating:

“The three legged dog. Run’n, jump’n and with an incredible case of the wiggles. This dog does not ask for pity.”

The three legged dog.
run'n, jump'n and with an incredible case of the wiggles.
This dog does not ask for pity.
This dog looks up to us.
Wants to know what's next.
Head tilted it says.
Where should we go,
what should we do?
Why are we waiting?

I say to myself.
This dog is right

Many believe this is a reference to “Pizza Dog,” the name of a three-legged dog in Marvel’s Hawkeye comics who also appears in the Hawkeye trailer. Also, Hawkeye takes place in Hell’s Kitchen — the same area of New York that Daredevil and Kingpin operate within.

If Kingpin emerges as a puppet master of crime in the Hawkeye series as part of the cast, it could have major ramifications across the Marvel Universe.

While you are waiting to see the Hawkeye cast in action on November 24, 2021, you can catch up on Marvel’s series on Disney+. All episodes of WandaVision, The Falcon and The Winter Soldier, and Loki are now streaming. Marvel’s What If…? aired its Season 1 finale on Wednesday, October 6.

Who do you think will be the main villain of Hawkeye? Let us know in the comments!

Comments Off on Who’s Who in Marvel’s ‘Hawkeye’ Cast?