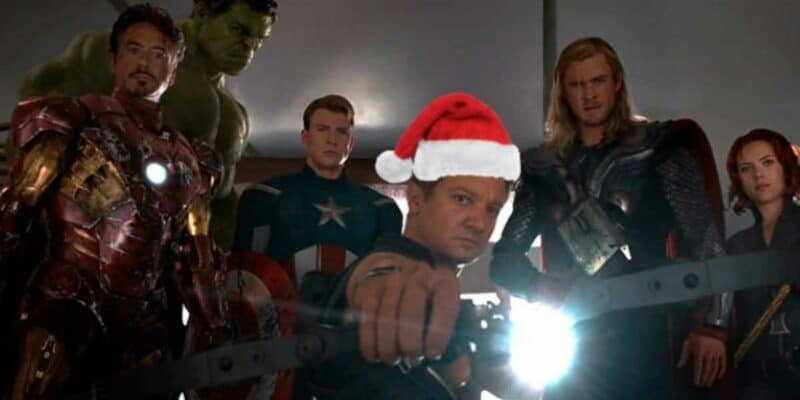 Marvel Studios is bringing the holidays to the MCU. We already knew that we were getting a Guardians of the Galaxy Holiday Special in December 2022. Now, a leaked preview of TV Guide’s write-up on the upcoming Hawkeye series has revealed that it will be “packed to the brim with Christmas spirit,” according to Executive Producer Trinh Tran.

Related:  Did You Miss The Secret Winter Soldier Reveal In Latest Marvel Show?

Now Marvel fans will no longer have to settle for Iron Man 3 (2013) starring Robert Downey Jr as Tony Stark AKA Iron Man, as the only Christmas movie in the Marvel Universe. Even though fans debate whether the film that introduced the fake Mandarin (Ben Kingsley) counts as a Christmas movie – Marvel says it counts:

“The Christmas setting adds another layer to the story because it sure feels like Killian is literally a ghost from Tony’s holiday past that’s come back to haunt him. Honestly, if there’s one movie in the Marvel Cinematic Universe that could be compared to Charles Dickens’ A Christmas Carol, it’s Iron Man 3.”

But it’s about time Marvel fans had more than one of the more divisive MCU films to celebrate the holidays. And it looks like Marvel is setting up the Hawkeye series starring Jeremy Renner as Clint Barton (Hawkeye) and Hailee Steinfeld as Young Avenger Kate Bishop (Hawkeye) to fill the christmas void.

The Hawkeye series will debut on Disney+ on November 24, 2021 and run for six-episodes just in time for Christmas and is officially described as:

It will also introduce Maya Lopez AKA Echo (Alaqua Cox) as the first Native American hero in the MCU. She will be the second deaf character to debut in the MCU since Makkari (Lauren Ridloff) will appear in Eternals on November 5, 2021, just two weeks ahead of Echo.

Other rumors suggest that Vincent D’Onofria’s Kingpin from Netflix’s Daredevil series may make the transition to the proper Marvel universe in Hawkeye. This coincides with Charlie Cox (Matt Murdock/Daredevil) rumored to return in the upcoming Spider-Man: No Way Home (December 17, 2021) to get Tom Holland’s Peter Parker AKA Spider-Man out of a legal jam.

The Hawkeye series is inspired by writer Matt Fraction’s award-winning Hawkeye Marvel Comic book run. It has been rumored that Jeremy Renner’s Hawkeye will also become deaf as he did in that comic book series. It will center around Hailee Steinfeld’s Kate Bishop taking up the Hawkeye Mantle.

Marvel Studios could also be developing a Halloween Special based on recent casting announcements. The rumor suggests that a casting call for a Latino male in his 30s strongly suggests the debut of Jake Gomez AKA Werewolf by Night that could even tie into the upcoming Moon Knight starring Star Wars’ Oscar Isaac as Marc Spector AKA Moon Knight).

Disney+ even has more holiday entertainment planned for subscribers with the LEGO Star Wars Terrifying Tales slated to premiere on Disney+ October 1.

Let us know in the comment which holiday show you are most looking forward to and have a very Merry Marvel Christmas.

Comments Off on Marvel Studios Has a Christmas Surprise For Fans