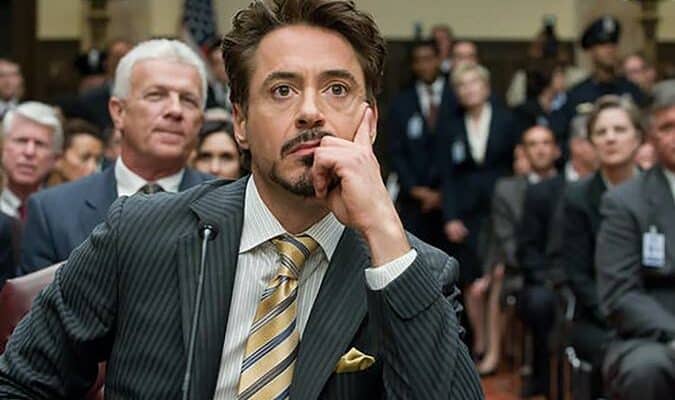 As the September 3, 2021 debut date of Marvel Studios’ latest endeavor, Shang-Chi and the Legend of the Ten Rings, draws ever closer, Marvel fans are getting excited about the newest MCU Phase 4 project.

The film, which stars Simu Liu as the title character, is set to introduce the real Mandarin — Shang-Chi’s father, Wenwu, played by Tony Leung — into the Marvel Cinematic Universe for the first time.

If the name “the Mandarin” sounds familiar to you, though, you’re right on the money. The character — or, at least, Ben Kingsley’s fraudulent version of him — played a role throughout the Robert Downey, Jr.’s Iron Man trilogy.

We first learned of the Ten Rings organization in the very first Marvel Cinematic Universe film, Iron Man (2008). Then, the elusive group actually made a second pseudo-appearance in the Iron Man trilogy, when the Mandarin is mentioned in Iron Man 3.

Although RDJ has made it abundantly clear that his time in the MCU is over — even infamously unfollowing all of his Avengers: Infinity War (2018) and Avengers: Endgame (2019) costars on social media — Kevin Feige’s Marvel Studios isn’t done with Tony Stark just yet.

As a matter of fact, he made a brief cameo appearance in the latest Shang-Chi and the Legend of the Ten Rings trailer.

At approximately the 0:36 mark of the trailer, fans see Wenwu sitting in front of numerous screens playing what appears to be security camera footage. He says, “I always know where my children are.”

The largest screen features the incident when Tony Stark was kidnapped by the Ten Rings, although it doesn’t pan down far enough in the trailer to see Downey, Jr.  — as you can see, it is exactly the same footage from Marvel Studios’ 2008 Iron Man outing [below].

While we know RDJ won’t be returning for Shang-Chi, Iron Man fans may be able to look forward to one more glimpse of their favorite playboy turned super hero in this archive footage.

You can watch the full Shang-Chi and the Legend of the Ten Rings footage below:

2008’s Iron Man tells the story of Tony Stark, a billionaire industrialist and genius inventor who is kidnapped and forced to build a devastating weapon. Instead, using his intelligence and ingenuity, Tony builds a high-tech suit of armor and escapes captivity. When he uncovers a nefarious plot with global implications, he dons his powerful armor and vows to protect the world as Iron Man.

Are you interested to see this new Marvel movie connect back to the Iron Man films?